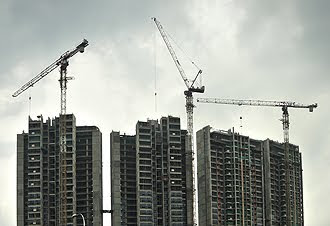 IN JANUARY, as the global financial storm lashed Singapore shores, fears took hold that large numbers of cash-strapped home owners might default on their monthly mortgage instalments, as businesses went belly-up and jobs were lost.

DBS Bank went out of its way to calm the jitters by offering to resurrect the interest-only payment scheme to allow borrowers to make only interest payments on their home loans, to give them breathing space to sort out their finances.

Only months later, in a surprise to many, the tide turned and there was a huge revival in the residential market. The gloom lifted as confidence grew and buyers rushed back to snap up properties - despite the stress that continued to be felt in the corporate sector.

The statistics are impressive. In the second quarter, 10,184 HDB resale flats changed hands - up from 6,446 units in the first quarter and 7,763 units in the same quarter last year.

This, in turn, triggered a boom in lower-priced condos, as HDB sellers upgraded to private developments.

For many, buying an HDB resale flat has turned out to be a sure-win investment. Despite the onset of the global financial crisis two years ago, HDB prices have scarcely fallen. In fact, they are up 35 per cent since 2007.

And why not? As one housing agent observes, even though the prices of HDB resale flats are high, they have become more affordable. Buyers need only to fork out a down payment - as low as 10 per cent of the purchase price - in order to qualify for a bank loan to buy their dream homes.

Some observers have been quick to attribute the hike in housing prices to the growing number of foreigners becoming permanent residents, which makes them eligible to buy HDB resale flats.
For many new permanent residents coming from countries such as China, where payment for a house must be made in full by cash, Singapore is a paradise. It is impossible for them to get an appointment to see the bank manager in their home country, let alone get a loan if they do not have the necessary 'guanxi' or connections.

In Singapore, as long as they are gainfully employed and have some savings, they have a bevy of banks competing for their attention and offering them loans on attractive terms to help them buy their homes.

But stock traders offer a different explanation for the exuberance in the housing market. Could the explanation be a little more sinister? Does the argument about buying an HDB flat because past trends show rising prices have a familiar ring to it?

In 2002, to make up for the loss of business elsewhere, banks in the United States started to extend huge loans to home buyers with the cheap credit supplied by the US central bank to fight the bursting of the dot.com bubble.

The US housing market record was even more impressive than HDB's, with home prices experiencing an almost uninterrupted upswing since World War II.
The upshot of the lending frenzy: Home owners borrowed ever bigger sums against their properties to finance their consumption, while even those with doubtful credit histories were extended huge housing loans too.

That reckless drive caused grief for the US, as a huge number of mortgages turned sour two years ago and unleashed a credit crisis so severe it almost caused the global financial system to collapse.

For some, there is a striking resemblance between the boom in the US housing market in 2002 and our own real estate rally now.

Let us recognise that our housing boom might have been shaped by events far beyond our shores - the loose monetary policies implemented by US Federal Reserve chairman Ben Bernanke, as he trimmed interest rates to almost zero, in order to combat falling US prices.
Because the US dollar is the world's reserve currency, this has the effect of sharply depressing interest rates around the world, including Singapore, where POSB now pays its depositors a paltry 0.125 per cent interest on their savings.

In such a situation, it is not surprising to find depositors looking for investment opportunities, while banks sit on huge swathes of cheap funds that they are desperate to lend out.

Like the US situation in 2002, banks in Singapore have refrained from lending aggressively in the corporate sector, as recession-hit businesses struggle to regain their footing.

Instead, they have also turned to the home loans market to make up for the slack in business.
But if this housing rally is financed by the cheap credit boom provided by Mr Bernanke, it is only temporary and will screech to a halt as soon as he starts to remove the trillions that he has poured into the global financial system.

For banks lending merrily on the real estate market with few strings attached, there is the chilling prospect that the fears that emerged in January, over possible mortgage defaults, might be realised this time around.

What can be done?

Rather than press the HDB to build more flats that might, in turn, create a housing glut as the economic cycle plays out, let us insist that our lenders tighten their generous lending terms.
For a start, they should consider raising the down payment, which a home buyer has to fork out before he qualifies for a mortgage, from the current 10 per cent to 20 per cent or even 30 per cent of the purchase price.

Given the important role banks play in our economy, such a move would be prudent, given the danger of a bubble building up in the real estate market.

Sure, this move may mean a delay for some in buying their dream homes, as they will have to save longer to make the down payment.

But it will ensure that the Singapore dream of owning one's home does not turn into a sub-prime style nightmare for them and for the rest of us.