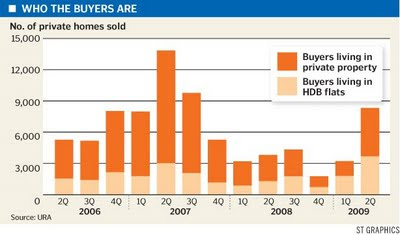 THE property boom is fast spreading to the upper reaches of the market, with more people buying premium-priced homes, according to data from property consultancy DTZ.

The firm’s analysis of caveats lodged shows that 22 per cent of total private home sales in the second quarter were for homes priced above $1.5 million, compared to 10 per cent in the first quarter.

Buyers living in private residences bought 4,651 homes between April and June, more than the 3,710 homes purchased by HDB-based buyers. DTZ said that this showed a spillover of demand from the mass market to the mid- and higher-tier segments.

It is a turnaround from the first quarter, when HDB upgraders and first-time buyers outnumbered buyers living in private homes. Seven in 10 buyers of new private homes in the first three months of the year had Housing Board addresses.

The DTZ data highlights that 25 per cent of property hunters snapped up homes in the prime 9, 10 and 11 districts in the second quarter, up from 14 per cent in the first quarter. It was the first time in 11/2 years that sales in prime districts exceeded 20 per cent of total sales.

‘As private home prices have corrected 10 to 33 per cent from their 2007 peak to the lows of the first quarter of 2009, Singapore households have ploughed savings accumulated during the prosperous years in 2004 to 2007 into the property market.’

Resilient HDB resale prices have created a wealth boost for HDB upgraders, causing the proportion of buyers with HDB addresses in the second quarter to reach 44 per cent. Though a smaller proportion than in the first quarter, this was well ahead of the 29 per cent seen in 2006 when the market started to pick up, notes DTZ. HDB upgraders and first-time homebuyers typically buy into mass market condominiums, which are usually lower-priced homes in suburban areas.

In comparison, some 60 per cent of buyers living in private homes bought units costing more than $1 million.

A larger group of buyers living in HDB flats bought smaller units of 1,400 sq ft or below. This can prove to be more affordable as the total quantum price can be relatively low, even if the per sq ft price is on the high side, experts said.

Keen buying interest spilled into the secondary market, with sub-sales of non-landed homes trebling to 1,200 units in the second quarter. The sub-sale price of these homes rose 18 per cent to $960 per sq ft (psf) from $813 psf, said DTZ.

Foreign buyer numbers rose, but they still bought only 15 per cent of private homes priced above $1,110 psf in the second quarter, compared with 29 per cent for the whole of 2006. Such buyers are increasingly moving to mid-tier properties on the city fringes, DTZ observed.

Ms Chua predicted more units to be transacted at $1.5 million-and-above in the current quarter, as more projects in the $1,500 psf to $2,000 psf price bracket came onto the market in July and August.

But if private home prices continue to move far ahead of HDB resale prices, HDB upgraders could be forced to pull back, said Jones Lang LaSalle’s head of research for South-east Asia, Chua Yang Liang.