THE still-strong but slowing private homes sector is being left behind by the HDB resale market where prices and transaction activity are surging.

Agencies report that the high demand seen early in the year has been sustained with sale numbers staying buoyant - and nudging up prices in the process.

Early HDB estimates for the second quarter showed that resale prices rose 3.8 per cent to yet another record level, following a 2.8 per cent rise in the first. 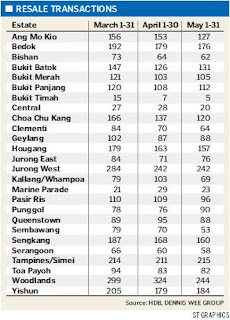 It marked the eighth straight quarter that prices have broken records since 2008, when they surpassed the peak levels of 1996.

The figures released on Thursday have prompted analysts to revise their full-year estimates for price rises from 5 to 8 per cent to 12 to 15 per cent.

They say the brighter economic outlook is helping to sustain demand.

Dennis Wee Group said its study of HDB data shows that HDB resale transactions were moving briskly in April-May, with about 5,892 resale deals done in the two months. There were 8,484 deals done in the first quarter, according to HDB, which will provide second quarter sales numbers later this month.

ERA Asia-Pacific assistant vice-president Eugene Lim said the April to June period is the most active for HDB resales.

Resale deals done by ERA - which has a market share of around 40 per cent - reached 3,531 in the second quarter. Still, there will not be as many resale deals transacted this year as last year because many more new flats are being launched.

The activity in the HDB resale market is in contrast to the slowdown in the private homes sector, particularly in the prime districts 9, 10 and 11.

Total sales of these prime private homes slowed to 308 units in May, from 723 in April and 688 units in March, said Dennis Wee Group director Chris Koh.

While the high-end market is in a stalemate, there is a pool of buyers for HDB resale flats.

One sign of buying interest is the climbing cash-over-valuation (COV) - cash paid upfront by buyers on top of a flat's valuation.

Mr Lim added: 'Now, buyers and sellers just haggle on the cash portion, without bothering to talk about the valuations.

'It's a chicken and egg situation for many. If they sell to move to a new place, they will ask for high cash in order to pay the other seller.'

Some sellers are raising prices to take advantage of the situation, he said. Mr Lim cited a case where a seller was about to seal a deal with a COV of $28,000 for his $280,000 fourth floor, three-room flat in Clementi.

He rejected it after reading about the 3.8 per cent rise in HDB resale prices in yesterday's papers and is holding out for a better offer, claimed Mr Lim.