Economists in frenzy of forecast upgrades

Surge in manufacturing drives optimism, but some see headwinds

ECONOMISTS are yet again hiking their forecasts for Singapore's economic growth, with most significantly above the Government's forecast.

A huge surge in manufacturing in recent months has prompted some economists to upgrade their full-year forecasts above 10 per cent, even as high as 13 per cent. 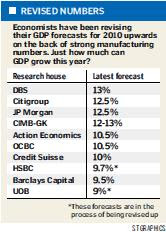 The latest official forecast as of May is for growth to hit between 7 and 9 per cent. But that now looks to be behind the curve.

'Growth has exceeded expectations, and the Government will have to come around to revising that upwards soon,' said Action Economics' David Cohen.

Despite the prospect of an uncertain second half, Singapore's economy grew so strongly in the first half that several economists are upping their full-year gross domestic product (GDP) predictions, with others expected to follow.

Among the most optimistic is JP Morgan's Matt Hildebrandt, who suggests full-year growth could hit 14 per cent - a 'monster number' and a Singapore record eclipsing the 13.8 per cent set in 1970.

'In the best case scenario, growth could exceed 14 per cent... Even if we just flatline for the rest of the year, the economy will likely grow at least 13 per cent. The first half really carried us through.'

Still, CIMB-GK economist Song Seng Wun points out that double-digit GDP growth in the first quarter only puts Singapore's economy slightly above its pre-crisis levels. 'We've regained two years of GDP. But the number exaggerates the extent of what we've gained.'

Also, some economists say double-digit growth this year is far from certain. They are expecting overall economic growth to be dented in the second half by slowing pharma and electronics sectors.

A Straits Times poll of 10 economists yesterday showed a median forecast of 10.5 per cent for full-year GDP growth, ahead of the 9 per cent median from a Monetary Authority of Singapore survey of economists conducted in late May.

While manufacturing has been firing on all cylinders - it grew a record 58.6 per cent in May after a 49.7 per cent surge in April - other sectors such as tourism and the services sector are also being fuelled by a region-wide recovery, said Mr Cohen.

If such impressive bounce forecasts prove accurate, they will easily put into the shade previous recoveries.

Singapore grew 6 per cent in 1999 after contracting 2.1 per cent in 1998 during the Asian financial crisis. And, in 2001, the Singapore economy contracted 1.2 per cent, and then rebounded 4.2 per cent the following year.