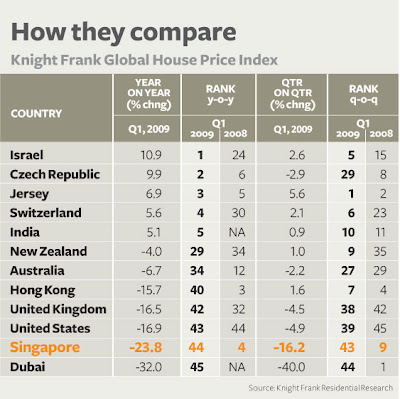 From being among world's best performers last year, it's among the worst in Q1

FROM around the top of the heap to near the bottom of the pile in just 12 months!
A year ago, Singapore was ranked as the fourth best-performing market in the world under Knight Frank's Global House Price Index based on the first-quarter's year-on-year price change.
This week, it emerged as the third-worst in a table that listed a total of 46 markets.
The house price index for Singapore slipped 23.8 per cent in Q1 2009 over the same year-ago period. And with the index declining 16.2 per cent quarter-on-quarter in the first three months of this year, Singapore emerged as the second worst-performing market based on a quarter-on-quarter ranking, compared with its ninth position a year ago.
Knight Frank's index for Singapore was pegged to the official Urban Redevelopment Authority's price index of non-landed private homes in the Core Central Region.
Israel was the top performer over the 12-month period ending Q1 2009, recording price growth of 10.9 per cent, followed by the Czech Republic with a 9.9 per cent increase. The worst performers were Latvia, Dubai and Singapore with declines of 36 per cent, 32 per cent and 23.8 per cent respectively.
On a quarter-on-quarter comparison, Dubai posted the worst performance with a fall of 40 per cent, followed by Singapore.
Hong Kong, saw its Q1 ranking (based on a year-on-year comparison) slip from third spot last year to 40th position, with a price drop of 15.7 per cent. United Kingdom was ranked 42nd on an annual-change comparison (the price slide was 16.5 per cent) while the US was in 43rd position with a 16.9 per cent decrease.
India made it to the top 10 list; it was ordered fifth with a 5.1 per cent year-on-year price appreciation in Q1 2009.
The percentage changes are calculated in local currency terms and are hence not affected by fluctuations in exchange rates.
'There is sporadic evidence of buyers snapping up relative bargains. However, of those buyers in a position to move, many are still waiting for clearer signs that markets are approaching the bottom of the cycle,' Knight Frank said.
Fourteen of the 46 markets covered by the index had not reported Q1 data at the time of the writing of the report.
'The latest data suggest some easing in the plight of markets. On a quarterly basis, 48 per cent of the countries from whom we received Q1 data reported a drop in prices, compared to 88 per cent in our Q4 2008 index.
'On an annualised basis, 48 per cent of countries also showed a fall in values compared to 77 per cent in Q4. Given the high proportion of 'absentees' for Q1, however, it would be potentially misleading to jump to too many hasty conclusions, although over half had shown annual and/or quarterly price falls at the last time of reporting. Nonetheless, the shorter-term future direction of most underlying economies suggests that the world's residential markets are likely to continue to suffer for some while,' Knight Frank's report said.
The consultancy's director of research and consultancy in Singapore, Nicholas Mak, said that while there has been a pick-up in private home sales lately (with developers managing to inch up prices for better-selling projects), a sustained price recovery will hinge on an improvement in the jobs market. 'If expats are not coming into Singapore, the strength of the rental housing market will be affected and that will, in turn, affect investment demand for residential properties,' he added.
A developer said: 'While we are seeing price stability in the mass-market segment, I think the high-end sector will not stabilise until the perception of DPS-buyers defaulting clears away'.
The government scrapped the Deferred Payment Scheme (DPS) in October 2007.
The 30 to 40 per cent slide in high-end residential prices, coupled with more cautious bank lending to property investors, could mean that some DPS-buyers may not complete payments for units bought during the 2007 peak. A surfeit of such properties making their way back to the market could depress prices. While developers could take legal action against local buyers, they may have a harder time pursuing foreign buyers, especially companies registered in the world's tax havens.
Source: Business Times, 30 May 2009
Posted by About Singapore Property