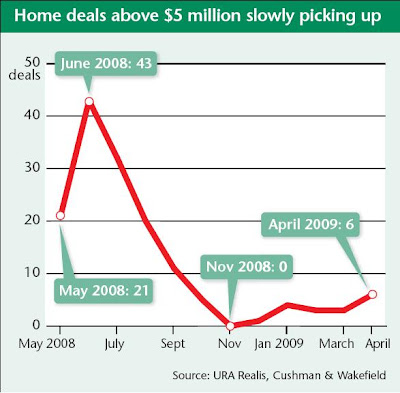 Analysts say buyers looking for good value slowly trickling back into market
Interest in the top end of the property market appears to be slowly picking up from near non-existent levels.
Several investors have trickled back to the resale property market, taking the chance to pick up posh apartments at prices mostly below $2,000 psf, or way below what was quoted last year.
One such unit at the 55-unit The Ladyhill that cost no less than $6.5 million has just been sold to a Korean investor.
The price for the freehold apartment works out to $1,700 per sq ft - which was the average price of the first 20 units sold at the condo's 2000 launch.
Prior to this deal, only two caveats had been lodged for the property in the past 12 months. Both were done at higher levels - one was for a bigger unit in July last year at $2,149 psf or $9 million, and the other was for a 3,283 sq ft unit for $2,193 psf or $7.2 million last November.
Consultancy Cushman & Wakefield, which brokered the latest deal, said the volume of top-end deals is not quite there yet but interest is certainly slowly picking up.
Buyers are looking for good value, said property experts.
Resale deals are slowly being done because some sellers are more willing to be flexible and there is limited supply in the market, they said.
Developers are still lying low where top-end launches are concerned, said Savills residential director Phylicia Ang.
Indeed, few developers of high-end developments want to sell at today's prices, said Cushman's managing director Donald Han.
They would rather wait for the right time to launch as going to market now would require them to cut their price levels by a significant amount, he said.
Government data compiled by Cushman & Wakefield shows that six deals - each worth more than $5 million - were done last month, up from three deals in March.
It is a slight improvement from the dismal levels last November (zero deal) and December (one deal). Before the downturn got worse, such deals numbered 21 and 43 in May and June last year.
While high-end prices have not stabilised, there may not be a repeat of some very low price levels registered in recent months, experts said.
'Just about three months ago, you could get an Ardmore II unit at less than $1,800 psf. At that time, you couldn't see the daylight in the market,' Ms Ang said.
Indeed, a mid-floor Ardmore II unit was sold for only $3.375 million or just $1,668 psf in February while a high-floor unit went for $3.6 million, or $1,779 psf in March, according to caveats lodged.
Caveats lodged last month show four deals done from $1,600 psf to $1,917 psf.
At the 2006 launch of Ardmore II, apartments were sold for an average price of about $2,300 psf, or between $4.2 million and $5.5 million per unit.
At the nearby 330-unit Ardmore Park - long associated with posh living - no deals were registered in the first three months of this year.
Caveats lodged show that three deals were done last month at $1,976 to $2,184 psf, below the deals of $2,635 to $2,791 psf in June and July last year.
Come the second half of the year, Mr Han said he expects to see more resale activity in the upper end of the market for deals worth $5 million and above.
Top-end launches, however, may not surface this year.
'If you're talking about the high-end market, as in those priced above $2,000 psf, there won't be any launches until the market improves,' said a consultant who declined to be named.
'If you go above $2,000 psf today, these buyers will disappear.'
Source: Straits Times, 31 May 2009
Posted by About Singapore Property