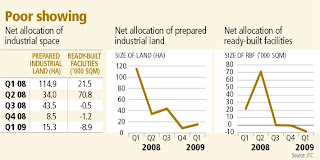 (SINGAPORE) For the third straight quarter, net take-up of ready-built factory space in Q1 2009 fell into negative territory for industrial landlord JTC Corporation.
While the agency leased or rented out 10,800 sqm of such space, companies returned 19,700 sqm, resulting in a negative net allocation of 8,900 sqm.
This is a sharp deterioration from the minus 1,200 sqm registered in Q4 2008, and the minus 500 sqm in Q3 2008.
A large decline in the amount of space leased or rented out accounted for the poor showing in Q1. The gross allocation of 10,800 sqm fell 46 per cent quarter-on-quarter and 64 per cent from Q3 2008.
Terminations on the other hand, eased. The 19,700 sqm returned in Q1 was 7 per cent less compared with Q4 2008 and 35 per cent less compared with Q3 2008. Some 64 companies returned ready-built space to JTC and most of them had occupied flatted factories. Poor business and the need for consolidation drove a large part of the terminations.
Support industries in logistics, services and construction together accounted for the bulk of terminations, at 53 per cent. The precision engineering industry also fared poorly, making up another 26 per cent of terminations.
Despite falling demand for ready-built factory space, an even larger decline in supply helped push occupancy rate marginally higher to 97.7 per cent in Q1 from 96.8 per cent in Q4 2008.
Retirement of flatted factory space scheduled for redevelopment contributed to the smaller supply.
'Things are still slow' for many industries, said DBS Vickers analyst Derek Tan. Nevertheless, there is a sense of 'improved optimism'.
Just yesterday, Citi economist Kit Wei Zheng adopted a less bearish stance and adjusted his GDP forecast to minus 5 per cent for 2009, up from minus 6.4 per cent previously.
JTC saw more positive signs from the prepared industrial land segment in Q1 - net take-up rose 80 per cent from Q4 2008 to 15.3 ha.
Compared with a year ago however, the situation still appears weak. Net take-up of prepared industrial land was 114.9 ha in Q1 2008 - more than seven times that in Q1 this year.
In Q1, gross allocation of space more than doubled from the previous quarter to 30.8 ha. The increase more than offset a smaller rise in terminations, which amounted to 15.5 ha in the quarter.
Thirteen companies returned prepared industrial land to JTC in Q1 - nine which previously
occupied generic land and four which were from wafer fab parks. Electronics and precision engineering industries contributed to more than half of the terminations.
Source: Business Times, 12 May 2009
Posted by About Singapore Property