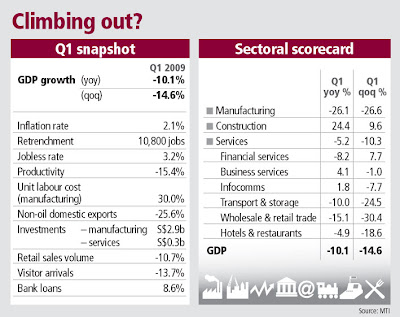 But, with both green shoots and brown weeds in sight, official forecast stays
(SINGAPORE) The Singapore economy has probably hit bottom, the Ministry of Trade and Industry (MTI) reckons. But with the external outlook still highly uncertain, it is keeping for now its forecast of 6 to 9 per cent contraction in 2009, though a second stimulus package now looks unlikely.
MTI yesterday announced revised first quarter GDP figures that are markedly better than the flash estimates unveiled a month ago, thanks to better than expected performances in financial services and some manufacturing segments.
On a year-on-year basis, GDP shrank 10.1 per cent in Q1 - still the sharpest on-year contraction on record, but better than the minus 11.5 per cent initially estimated.
Against the preceding Q4, GDP fell 14.6 per cent - 'not as bad as suggested by the April advance estimates (20 per cent) but bad enough', MTI says.
While the Q1 sectoral numbers are still largely negative, the manufacturing contraction was a smaller 26 (rather than 29) per cent, and financial services reversed two consecutive quarters of sequential declines with a 7.7 per cent q-o-q growth.
But, all told, there are still no decisive indicators of economic recovery on the external front, MTI notes, with both green shoots and brown weeds clouding the outlook.
'What we're a little surer of is that we have probably seen the bottom,' MTI second permanent secretary Ravi Menon told a media conference yesterday. 'But what we do not know is whether we're going to stay at the bottom for a bit longer, or whether we're going to start having a decisive rebound. That remains uncertain. And the signs point to both directions.'
Plus, there remains 'significant downside risks', not least of which include uncertainties in US banking, where lending continues to wane, and the risks of a second round of financial sector collapses cannot be ruled out.
'In short, there are some positive signs of a bottoming out (globally). But it is not clear that we have begun to rebound from the bottom,' said Mr Menon.
If the Singapore economy bottoms out in the current Q2 and starts picking up pace over the third and fourth quarters, GDP contraction this year will likely be about 6 per cent, the optimistic end of the official forecast.
'If we bottom out and stay at the bottom, it will be closer to minus 9 per cent,' Mr Menon said. 'We really can't tell at this point. The signals are really mixed.' What's apparent is that there has been a shift in sentiment, a sense that things have stopped getting worse compared to, say, three months ago, he added.
'I think that shift is quite perceptible and we subscribe to that view too.'
And, it now does not look likely, at least 'at this point in time', that Singapore would need another stimulus package, on top of the S$20.5 billion fiscal aid dispatched in January, Mr Menon said. The government had said then that Singapore stood ready to 'do more' if and when necessary.
Mr Menon cited four key factors critical for Singapore's climb out of recession : firm US recovery, particularly financial stability; return of consumer confidence in America; fiscal stimuli at work in various countries; and not least, the absence of any major financial shock.
But what has been 'striking' about the current recession here is the resilience of the job market, asset market and the corporate sector, he said, noting that the net job loss in Q1 was 'just 1,000', and that the value of household assets in 2008 was seven times that of liabilities.
'These strengths position the economy well to ride out the current recession and to seize the recovery that will eventually come,' he said.
While the revised Q1 numbers came out a little better than expected, economists yesterday said that the overall growth momentum trend, including large sectoral declines, remains unchanged. But all noted the 'more positive' tone of MTI's remarks.
Morgan Stanley's economists believe that the initial phase of the recovery will likely be uneven, with the sequential declines easing from here on but still a while before the y-o-y measure turns positive.
'We expect this in Q1 2010,' they said, adding that domestic capital investment will likely lag the recovery.
OCBC Bank economist Selena Ling also believes that 'without a clear turnaround in end-markets in the G3, a full demand recovery may remain a 2010 rather than a 2009 story for now', even as the pace of trade declines eases in the months ahead.
More upbeat, Citigroup economist Kit Wei Zheng, who recently upgraded his GDP forecast for Singapore, expects the economy to be out of recession sooner - by Q4 this year - and return to pre-recession levels by end-2010 or early 2011.
'Manufacturing has likely bottomed, particularly electronics,' he noted.
Goldman Sachs yesterday said the risks to its forecast of Singapore's 2009 GDP pace, currently at minus-8 per cent, now look tilted to the upside, with global conditions stabilising.
Source: Business Times, 22 May 2009
Posted by About Singapore Property