Hotels in Singapore are in for hard times, with analysts saying that double digit falls in room rates and occupancies could be on the cards in 2009. 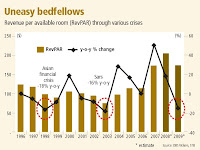 Likewise, marketwide occupancy is expected to see negative growth during the first half of 2009, although HVS expects the market to gain momentum in the middle to late 2009.

Marketwide occupancies will fall to 75 per cent and 72 per cent by 2009 and 2010 respectively, HVS said. By contrast, occupancy for 2008 is estimated to be 82 per cent. ‘Looking forward, an increase in supply not met by demand levels will lead to decreased occupancy projections,’ said David Ling, HVS managing director for Asia.

Bill Barnett, managing director of hospitality consulting firm C9 Hotelworks, also has a sombre set of numbers. ‘ARRs (average room rates) look to retreat back to the levels in 2006. RevPAR is forecasted to decline in double digits. Occupancies are set to decline in the region of 7-10 per cent,’ Mr Barnett predicted.

And in a Dec 18 note, DBS Group Research estimated that RevPAR will drop by 15 per cent this year from FY 2008 levels.

Hotels BT spoke to said that so far, they are holding rates firm. However, many are offering packages to draw leisure travellers as business from corporate travellers is expected to fall this year.

Hoteliers are certainly aware that tough times are ahead. ‘There is a definite softening of the market, in line with the global economic slowdown,’ observed Ignacio Gomez, regional vice-president and general manager of Four Seasons Hotel Singapore. Similarly, a spokesperson for Hong Leong Group said that 2009 is expected to be a ‘very challenging’ year.

The Royal Plaza on Scotts told BT that it expects room rates to decline by 5 per cent this year, while occupancy is forecasted to come in one percentage point lower.

The main problem is the expected drop-off in tourism numbers. DBS, for example, forecasted that the global slowdown in travel could drag visitor arrivals for this year 4 to 6 per cent lower than 2008 levels and 10 per cent from the record 10.5 million visitors registered in 2007.

To aggravate the situation, the hospitality industry will also see a fresh injection of supply as various new hotels open their doors. Total room stock is expected to grow by 12,000 rooms between now and 2012, of which about 40 per cent was slated for 2009, DBS reckons.

However, given the hefty construction costs coupled with the credit crunch, completion delays are pushing back launch dates - which could help cushion the impact somewhat.

For instance, NTUC Club’s 200-room Palawan Beach Resort, which was initially supposed to open last year, has been delayed while Far East Organization’s Quincy hotel will see a Q1 2009 opening instead of 2008 as originally planned. As such, the main supply looks set to come only towards the end of 2009 and 2010, with a large chunk stemming from the 2,600-room Marina Bay Sands.

Hotels also appear to be holding on to their staff for now. Four Seasons’ Mr Gomez, for example, said that it will continue to hire talent as required and will not compromise on its service standards. The Royal Plaza on Scotts has no plans to trim its workforce either. ‘In the weakening economy, it is still our top priority to provide our guests with a comfortable stay. The hotel will ensure that training, and staff development and growth are consistently maintained,’ said general manager Patrick Fiat.

Keeping a watchful eye on costs can also go a long way. To combat the slower growth rate for its hotels in Asia, Hong Leong early on embarked on efforts to manage costs and streamline operations, so as to adapt to the changing market conditions. ‘As a result, we managed t1/4o achieve revenue and earnings,’ a spokesperson said. ‘We will continue to evaluate our portfolio for improvement to remain competitive.’