1,200 luxury homes yet to find takers

A STOCKPILE of up to 1,200 luxury homes in prime districts remains unsold, adding to a growing supply overhang that is likely to drag prices lower this year.

That grim assessment of the very top end of Singapore's property market has been made by leading property consultancy CB Richard Ellis (CBRE). 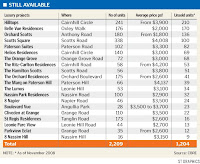 However, it has also concluded that despite the challenging market conditions, some developers may be able to hold on to projects until the market recovers.

'Developers who are laden with unsold units in projects that were already launched would prefer to focus on clearing them rather than launch new projects,' it said.

'This would inevitably lead to price cuts,' the consultancy added.

CBRE is projecting a decline this year of about 10per cent in the prices of good-class bungalows (GCBs) - the most prestigious bungalow type here - and 10 to 15per cent price falls for luxury apartments.

The top-priced GCB deal last year was a 52,528 sqft Leedon Park property sold for $43.2million in May. On a psf basis, the most expensive deal was at $1,303 psf for a Leedon Road property, also in May.

Given the current downturn, buyers will be looking to pay competitive prices for GCBs, but fire sales will be hard to come by as most GCB owners have the capacity to hold, said director of luxury homes Douglas Wong.

The luxury apartment market also saw a drastic fall in sales last year, with just 1,096 caveats lodged. Government data showed this worked out to just 19per cent and 32per cent of sales in 2007 and 2006 respectively, said CBRE.

Most of the luxury projects launched in early 2007 have been fully sold. But several projects remain on the market, especially those launched in the second half of last year when the sub-prime crisis hit.

As of last November, only 41 per cent of units offered at these launches had been sold.
This year, luxury sales activity is expected to be lukewarm, similar to the second half of last year, said CBRE.