CBRE: More than half of high-end condos unsold

Fifty-five per cent of about 2,200 units in luxury projects launched by developers between 2006 and 2008 remained unsold in November 2008, according to CB Richard Ellis (CBRE). 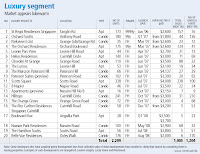 Most luxury projects launched in 2006 and early 2007 are fully sold, such as Ardmore II and Tate Residences.

But several projects, particularly those released during or after second-half 2007, remain on the market. 'By then, news of the sub-prime crisis had caused the market to pull the brakes,' CBRE said.

In the landed housing segment, the firm predicts a drop of about 10 per cent this year in the price of Good Class Bungalows (GCBs).

'GCB prices recorded very strong growth in 2006-7,' said CBRE director (luxury homes) Douglas Wong. 'This upswing in prices spilled over into the first half of last year. Right up to July 2008, average GCB prices continued to raise the benchmark.

'Also, the capacity of owners to hold prices added to the resilience in this segment in the second half of 2008.'

The highest psf price in a GCB transaction last year was $1,303 for a property in Leedon Road with only 21,097 sq ft of land. In absolute price terms, it fetched $27.5 million.

While the average price of GCBs rose last year, the number and value of transactions fell.

CBRE said: 'Going forward, we expect the activity in the luxury residential market to be lukewarm, similar to the pace in H2 2008. Hence, the number of GCBs and luxury apartments transacted will be small.'