(SINGAPORE) With a sizzling 18 per cent first-half pace in the bag, Singapore is on track to post a near 40-year high economic growth this year, if not its highest ever.

The Ministry of Trade and Industry yesterday bumped up the official forecast of Singapore's 2010 GDP growth by an unprecedented six points to 13-15 per cent - a range that should place it fastest-growing among, as one economist put it, 'normal functioning economies' worldwide. 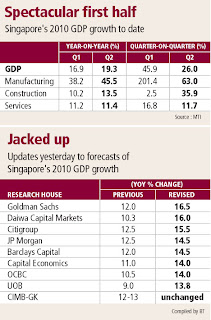 Most revised their recently-upgraded forecasts yesterday, with at least three estimates now above the official projection.

Still, MTI made it clear that the first half's 'exceptionally strong growth' is unlikely to be sustained into the second half, with a 'more subdued outlook' up ahead.

The Q2 figures unveiled yesterday are flash estimates based only on April and May data, and already the first June indicators in hand - key non-oil domestic exports - show a second straight month of sequential easing.

Indeed, the official 13-15 per cent GDP growth forecast would imply a sharp slowdown in the sequential pace - measured in quarter-on-quarter terms - in the second half, with perhaps one negative quarter, even if the year-on-year rates remain 'healthy'.

As one bank's economists note, if GDP growth turns out flat on a sequential basis for Q3 and Q4, full year growth will still cross 17 per cent. Most economists expect growth in the second half of the year, in on-year terms, to ease to around 10-15 per cent.

Commenting on Singapore's economic performance, Prime Minister Lee Hsien Loong said that the stellar growth this year will likely lead to the influx of at least another 100,000 foreign workers into the country. Speaking to Singapore reporters at the end of a working trip to the United States, he cautioned, however, against expecting such robust growth figures for the rest of the year - or the years ahead.

In a longer than usual statement with the advance estimates, MTI notes that the momentum of the global economic recovery has slowed of late, 'although a double-dip recession remains unlikely at this juncture'.

Sluggish demand in America and Europe - with emerging signs of slowdown in the US labour markets and as concerns over the EU's sovereign debt crisis persist - has dampened expectations for industrial output across Asia, it says.

As well, industry-specific factors here such as plant maintenance shutdowns in the biomedical manufacturing cluster will drag down growth, MTI adds.

The biomedical sector - specifically pharmaceuticals - was, of course, the key driver behind the phenomenal manufacturing growth in Q1 and Q2. MTI attributed the marked 1.4-point upgrade in Q1's GDP growth, from an earlier estimate of 15.5 per cent, to the biomedical cluster.

Q2 growth was fairly broad-based, with boosts as well from not only global electronics demand and trade flows but also strong domestic bank lending and foreign exchange trading and, not least, higher visitor arrivals, with the opening of the integrated resorts, MTI said.

Citigroup economist Kit Wei Zheng - who was probably the first, back in end-May, to signal the prospects of double-digit growth this year - says that his latest 15.5 per cent GDP growth forecast assumes an 11 per cent technical pullback in Q3 and 'broadly flat' growth in Q4.

But if the sequential pace stays positive in Q3, the positive output gap and inflationary pressures could well lead to further monetary tightening in October, he says.

And while Mr Kit is upbeat about this year, the high base of the first half will set 'a high hurdle' for growth in the first half of 2011, 'which leads us to fine-tune our 2011 forecast to 4.6 per cent, down from 5 per cent previously', he says.

While some economists reckon Singapore's robust above-trend economic growth will put pressure on inflation and wages, others note that the economy is in 'a sweet spot', enjoying strong growth and benign inflation.

But, says OCBC Bank's Selena Ling: 'The tide could change quite quickly given the swirling global under-currents of debt and fiscal consolidation, and lingering banking sector stresses in the developed economies.'

Rather more upbeat, PK Basu from Daiwa Capital Markets declares that Singapore - along with South Korea and Taiwan - will benefit 'hugely' from the massive IT rebound underway that's driven by a strong replacement cycle for PCs.