A TENDER for a large high-rise commercial site in the 200ha innovation and research hub one-north has attracted just two bidders.

That is about 7 per cent above the second highest bid of $384 million or $319.80 psf ppr from Mapletree Trustee. 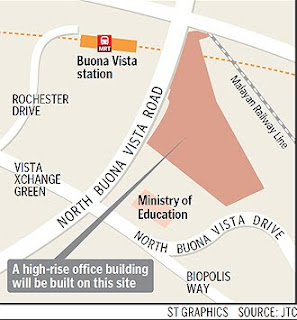 Ho Bee's general manager of marketing and business development, Mr Chong Hock Chang, said its plan is to rent out the office units for recurring income, and it is looking at achieving office rents of $5 psf.

'We believe we can build an iconic building on this landmark site,' he said.

The 99-year leasehold site has been on the Government's reserve list of sites since April 2008. A tender was finally triggered in May when Mapletree committed to a minimum bid of $320 million, or $266 psf ppr, which the Government found acceptable.

The site of about 1.8ha is located at the junction of North Buona Vista Road and Commonwealth Avenue West and is near the Buona Vista MRT station. It has a

JTC said the building will provide office space outside the Central Business District for the business support companies of the research institutes at one-north.

The low level of interest is due to the huge price sum involved, he added.

Also, 'as an office product, it is untested in the area, which is predominantly industrial in nature', he said.

CBRE Research said the development cost for a predominantly office tower is about $900 psf, based on the top bid.

Just under 1 million sq ft of net lettable area of commercial space could be developed on this parcel, said its executive director Li Hiaw Ho.

'This would facilitate the expansion of research and development functions at one-north and serve as an alternative source of office supply post-2013 in the Buona Vista sub-regional centre,' he said.

As office rents have bottomed out in the second quarter, they are expected to rise in time. 'The rental yield would therefore be in excess of 5 per cent,' said Mr Han.