Momentum of recovery in private residential rents also picked up

PRIVATE home prices generally rose at a slightly slower pace in Q2 than they did in Q1, but latest official numbers show a broad-based growth in property prices - with stronger quarter-on-quarter gains for office, shop and industrial properties, as well as HDB resale flat prices in Q2 than in the first quarter.

The momentum of recovery in private residential rents also picked up in the second quarter, supported by an acceleration in hiring of expats as Singapore's economy continues to expand. 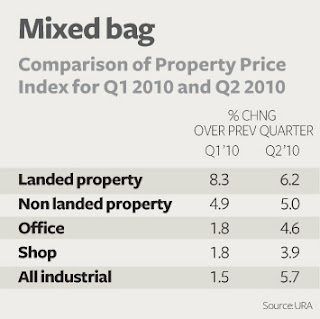 'Sentiment among developers and market watchers probably moderated from the end of first quarter as a result of the eurozone's economic problems, but the recent spectacular official GDP growth forecast for Singapore has probably helped to restore some confidence,' said Real Estate Developers Association of Singapore CEO Steven Choo.

The Urban Redevelopment Authority's (URA) benchmark overall price index for private homes rose 5.3 per cent in the second quarter over the preceding quarter, close to the 5.6 per cent per cent hike in Q1.

Likewise, the shop price index went up 3.9 per cent in Q2, following a 1.8 per cent pick-up in the first three months. URA's flatted factory and warehouse price indices rose 5.4 and 9.4 per cent in Q2. In Q1, each of these increased 1.5 per cent.

In the private housing market, prices of detached houses rose 6.8 per cent in Q2, slower than the 9.6 per cent increase in Q1. Semi-D and terrace houses appreciated 6 per cent and 5.6 per cent respectively in Q2 - compared with increases of 7.5 and 7.4 per cent in the first three months.

However, in Rest of Central Region the pace of price gain slowed from 7.9 per cent in the first quarter to 4.6 per cent in Q2.

In the primary market, developers sold a total of 4,033 private homes in Q2, down 7.9 per cent from Q1. In the secondary market, strong buying momentum was also seen in the resale market, with 4,682 private homes changing hands in Q2, although this was 5.6 per cent lower than the first three months of the year. However, subsale volumes eased 27.4 per cent, from 996 deals in Q1 to 723 in Q2.

'Resales were strong in Q2 because prices are more reasonable for older, completed properties than new project launches. On the other hand, subsales (which are secondary-market deals involving projects that have yet to receive Certificate of Statutory Completion) come in waves. Those who bought homes from developers in the past few months are probably waiting for prices to rise further before they offload their units,' suggests a market watcher.

In the leasing market, URA's All Residential rental index rose 5.9 per cent in Q2 over the preceding quarter, compared with a 4.7 per cent quarter-on-quarter gain in Q1. The index has appreciated 10.9 per cent since end-2009.

However, the latest All Residential rental index is about 11.1 per cent below its peak in Q2 2008.

Jones Lang LaSalles' head of residential Jacqueline Wong said the latest official figures confirm feedback from the ground. Monthly rentals of four-bedroom apartments in high-end developments such as Grange Residences, Draycott 8 and Ardmore Park are hitting $16,000-$18,000 on average - an improvement from $14,000-$15,000 in the second half of last year.

Ms Wong is predicting flattish rents until the end of this year, citing new competition with the impending completion of The Orchard Residences and The Marq on Paterson Hill.

URA numbers show 4,379 private homes received Temporary Occupation Permit (TOP) in Q2, compared with 1,407 units in Q1. The surge in new completions pushed up the islandwide vacancy rate for private homes to 5.4 per cent at end-Q2, from 4.6 per cent at end-Q1. But this could ease again as owners or tenants move into the new homes.