Govt doubles full-year forecast after record expansion in first half

SINGAPORE'S economy is on its way to chalking up two records this year: the highest growth in the country's history and the quickest rebound in Asia.

The Government yesterday nearly doubled its 2010 growth forecast in its third upgrade this year, after the economy surged at an unprecedented 18 per cent sprint in the first half. 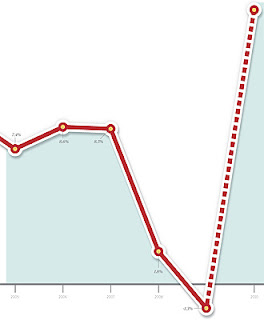 With guns blazing from all three key sectors of manufacturing, services and construction, the Ministry of Trade and Industry (MTI) now expects the economy to grow between 13 per cent and 15 per cent for the full year, up from its previous tip of 7 per cent to 9 per cent.

This brings growth this year squarely within reach of the last all-time high of 13.8 per cent in 1970 and surpasses most economists' projections.

It also puts Singapore ahead of the pack as the fastest-growing economy in Asia - and possibly the world - this year, beating powerhouses China and India.

Commenting on the growth numbers, Prime Minister Lee Hsien Loong told reporters accompanying him on a trip to the United States: 'It's a good result and we should be happy.

He also cautioned against comparing Singapore's performance with that of other economies. 'Maybe numerically, the growth figure may be higher than other countries, but I would hesitate to compare myself with China. I think if you compare yourself with Shanghai, they may well be ahead of us,' he said.

He attributed the massive growth numbers partly to the rebound from last year's downturn, and partly to new projects such as the integrated resorts. He also said the pharmaceutical industry has seen 'a very sharp increase in output this year compared to last year which I do not think will continue even into the next few months. So that part will probably tail off soon.'

The news of Singapore's sparkling performance prompted CIMB-GK economist Song Seng Wun to say: 'The fastest-growing economies this year will all be in Asia, led by Singapore. This growth rate is more typical of small emerging African countries than developed Singapore.' He credited the schemes that the Government rushed out to support businesses and employees in the recession, allowing them to bounce back quickly.

Even as MTI revealed record growth rates in the first two quarters of this year, it said the new forecast also factors in an expected slowdown in growth for the rest of the year.

Singapore grew by a tremendous 19.3 per cent in the second quarter over the same period last year, eclipsing the record set in the first quarter. First-quarter growth itself was revised upwards yesterday to 16.9 per cent, more than the 15.5 per cent estimated three months ago, on the back of stronger-than-expected biomedical output.

Growth in the second quarter was broad-based, with manufacturing, services and construction all logging double-digit expansions over a year ago.

The manufacturing sector outperformed the rest with a 45.5 per cent surge in output, but construction was the big surprise with a solid 13.5 per cent rise.

However, the growth momentum appears to be slowing. The economy grew an estimated 26 per cent between March and last month, on a quarter-on-quarter basis - a stellar performance, but down from a revised 45.9 per cent between December and March.

'Although the global economy remains on a recovery path, the pace of growth has slowed,' the MTI said, pointing to sluggish domestic demand in the United States and Europe.

'The exceptionally strong growth experienced by the Singapore economy in the first half of 2010 is therefore not likely to be sustained into the second half of the year.' The MTI also said growth will be dragged down by industry-specific factors such as maintenance shutdowns of biomedical plants.

On the latest spurt, PM Lee said: 'Now we must make the most of this opportunity to implement the restructuring, the upgrading, the productivity improvement which we have been pursuing and talked about in the Budget. Because unless you get these longer-term structural changes, we are not going to be able to sustain growth in the future years. And when we say sustained growth, we don't mean 9, 10 or 11 per cent growth in future years, but 3, 4, 5 steadily for another 10 years, I think we are doing well.'

The upgraded annual forecast implies 8 to 12 per cent growth for the second half of the year. While this marks a slowdown, it is still healthy, economists said. Several of them had already raised their 2010 growth forecasts to double digits before yesterday's announcement, but went on to upgrade them further. UOB economist Chow Penn Nee hiked her forecast by almost five points to 13.8 per cent. Barclays Capital economist Leong Wai Ho raised his from 12 per cent to 14.5 per cent.

Citigroup economist Kit Wei Zheng, one of the first to tip double-digit growth, bumped up his growth projection to 15 per cent from 12.5 per cent. But he added that this year's high base means next year's growth may come in lower, and adjusted his 2011 forecast downwards to 4.6 per cent accordingly.