Signs of another en bloc rush

Sale proceedings may have begun at up to 80 developments, with many more to follow

They were a feature of the last boom but fast fell out of favour when markets went south, yet there are signs that another collective sale rush is in the making.

There have been at least 16 collective sales this year, not counting many smaller ones that may have gone unreported.

This is in stark contrast to last year, when only one collective sale was sealed. There were 10 in 2008 but most were late spillover deals from the boom of 2006 and 2007.

The greatest spell of collective sales remains the first six months of 2007, when at least 55 projects were sold for an astounding $9.3 billion.

The slow start this year is not due to a lack of demand for collective sales, but a shortage in supply arising from the extra time needed to meet the tougher legal formalities and more detailed logistical arrangements when gathering owners' consent.

We should certainly see more collective sales over the remaining months of the year as the organisational momentum picks up pace. 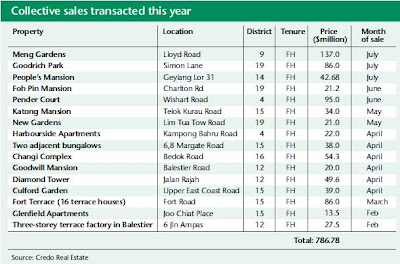 As many as 80 developments are believed to have formally embarked on steps to sell their properties en bloc, although the actual figure may well be more. But not all will secure the 80 per cent owners' mandate or find a buyer.

Numbers aside, larger projects are also expected to be introduced this year and next.

The 52-unit Goodrich Park near Kovan MRT station was sold in a collective sale to BBR Holdings for $86 million this month, but as the deal has not won unanimous approval from owners, it may need approval from the Strata Titles Board (STB).

Each of its owners is set to receive gross sale proceeds of between $1.55 million and $1.72 million - or about 70 to 80 per cent more than the market price.

In April, Culford Gardens in Siglap was also sold to Fragrance Properties for $39 million.

Despite the dominance of the Government Land Sales (GLS) programme this year, we believe that collective sales are still relevant in today's market as they fill the void left by the programme.

GLS sites have leasehold tenure and are mostly located in suburban areas, and their large-sized plots mean they typically cater mainly to bigger developers.

In most cases, collective sales complement the GLS programme, especially when they produce large prime freehold sites, which are in short supply.

However, leasehold collective sales in mass-market locations might find it harder to make large profits as developers might prefer the relative ease and certainty that GLS sites offer.

Owners contemplating such sales should also understand that sale activity takes place in waves since the factors that give rise to price differentials do not stack up for very long.

Many owners get concerned over the rising cost of replacement homes but this paradox is always present as collective sales inherently occur only when the market is buoyant. Acting decisively might help offset the risks of being caught cold.

It is also important for owners to elect objective and honest leaders, appoint and listen to competent lawyers and property consultants, set realistic prices, act decisively and stay united to ensure a happy ending.

Some owners might also wonder if there is a possibility that we will see another Horizon Towers dispute.

Horizon Towers was the most high-profile property sold in early 2007, just before the steep run-up in land prices. This factor and other technical irregularities resulted in the Leonie Hill Road condo becoming embroiled in one legal suit after another before the deal finally collapsed.

Since then, the laws have been refined. They now load more work and costs upfront for the owners, providing relief for developers with clearer rules.

Recent changes include the STB being relieved of its role of making rulings in disputed cases. The STB will continue its mediatory role, but this will be limited to 60 days - again to expedite the resolution of disputes over contentious sales.

In other words, warring parties can head to the High Court earlier in the process to have their disputes resolved, reducing the time taken to resolve the more difficult cases.

Minority owners are now unlikely to find as many faults as most of the typical grouses in the past have been adequately addressed. As a result, we expect fewer cases to reach the High Court and the Court of Appeal.

As we also do not see the market moving this year and next as dramatically as it did in the boom years, the motivation for a minority owner to challenge a sale may not be as strong as in 2007.

The laws are more robust and structured now and should make collective sales less controversial and more predictable.

The slow start this year is not due to a lack of demand for collective sales, but a shortage in supply arising from the extra time needed to meet the tougher legal formalities and more detailed logistical arrangements when gathering owners' consent.