Room for growth in high-end market

Singapore has long been seen as a safe investment haven - and foreigners are responding by snapping up property across the island.

Yet, the high-end apartments sector still has room for growth if trends in other cities are anything to go by.

Data from Savills shows that the average price of high-end apartments was $2,154 per sq ft (psf) in the second quarter, while that of super luxury private homes was $3,055 psf.

Super luxury homes - a subset of high-end homes - are defined as developments that achieved an average of $2,500 psf in the fourth quarter of 2006.

In Hong Kong, however, prices for high-end residences in the same quarter hit HK$14,520 (S$2,570) psf, 20 per cent higher than those here. As common spaces like corridors are taken into account in computing unit prices in Hong Kong, the actual price disparity could be even greater. 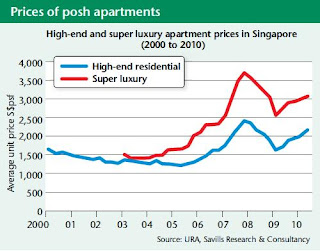 In addition, Sydney apartment prices are about 28 per cent up on Singapore's while London's values are an eye-watering 41 per cent higher.

China, however, is a mixed story. While prices in its two major cities are lower, they shot up 32 per cent in Shanghai last year and 15 per cent in Beijing - and are both at record levels, marginalising any potential short-term capital gains.

Furthermore, the high-end market in Singapore is the only sector where prices are still below previous peaks. Prices of high-end apartments are 11 per cent below record levels set in the fourth quarter of 2007 while super luxury prices are 17 per cent cheaper.

In contrast, mass market prices in May were already 15 per cent over previous peaks with mid-tier apartments a more modest 5 per cent above. As positive economic prospects for Singapore are likely to continue into the second half of this year, it is possible that prices of high-end apartments could reach previous peak levels by early next year. 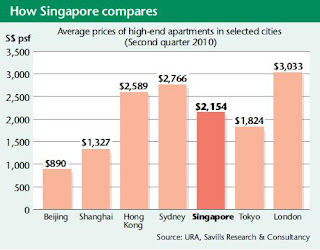 With rising anxiety over bubble risks and fears of more tightening measures that could derail prices, many East Asian investors may shift their funds to Singapore.

The government imposed 11 cooling measures in China earlier this year, helping to send new home sales plummeting 60 to 70 per cent in Beijing, Shanghai and Shenzhen in May alone.

As a result, more foreign buyers, especially mainland Chinese, have flocked to Singapore, at times buying with full cash payments.

They have displaced Malaysians this year as the No. 2 buyers of super luxury homes priced $5 million and above.

The growing number of high net worth individuals and millionaire Singaporeans could also see an increasing demand for luxury homes.

However, prime redevelopment sites for sale are lacking. The average take-up rate of high-end homes between 2005 and last year is 3,500 units per year, sitting comfortably above the average of 2,500 units being constructed yearly from this year to 2014.

Therefore, the supply of luxury homes is expected to be limited in the coming years and this imbalance should continue to sustain prices.

Luxury apartment prices are expected to rise by 5 to 8 per cent in the second half of this year.

This should help sustain demand for high-end homes even as an approximate 1,800 luxury apartments are expected to be launched in the second half of this year.

The writer is the senior manager, research & consultancy of Savills Singapore