THE cash premium paid by buyers chasing Housing Board (HDB) resale flats has risen islandwide in the second quarter, with many flat types attracting payments of between $30,000 and $40,000 above the market valuation.

The median outlay is now estimated to be well above the record $25,000 median in the first quarter, according to transaction figures from four property agencies.

The Straits Times has compiled median COV figures by flat type and estate based on the agencies' second-quarter sales to get a snapshot of the market ahead of the official statistics out next week. These agencies - PropNex, ERA Realty, HSR Property and ECG Property - make up almost the entire HDB resale market share.

The median COV is a mid-point: Half the units were sold for a COV above that value, and half below. The figures show that median COVs of three-, four-, five-room and executive flats in many estates are now $30,000 to $40,000. 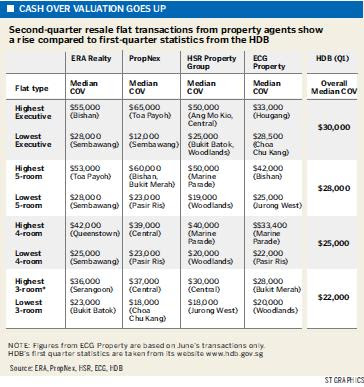 Agency bosses predict that the official median COV will be above $30,000 for the second quarter - setting a record in the process.

An HDB spokesman told The Straits Times yesterday that 'preliminary data indicates that the median COV is lower than $35,000'.

It noted that as COV is the result of negotiations between willing buyers and sellers, 'in any market at any given time, there will be high COVs, low and even no COVs'.

Analysts said that high demand amid tight supply is driving up the cash premiums. Others attributed rising COVs to the 'sell high, buy high' phenomenon gripping the resale market.

This means that upgraders and downgraders are selling their flats at high prices and asking for high COVs because they face the same demands when they go into the market to buy.

'This is a case of the cat chasing its tail and prices are spiralling upwards due to this situation,' said ERA Asia Pacific associate director Eugene Lim.

PropNex chief executive Mohamed Ismail noted that there is now 'a lot of lateral movement in the market from upgraders and downgraders', with first-time home buyers mainly left out of the action.

'These buyers are queueing for flats directly from HDB, which are more affordable. The resale market is also propped up by PRs who cannot buy new flats, but need a home urgently,' he added.

Agency data shows that executive flats in estates such as Bishan and Toa Payoh are selling at a median COV of $55,000 to $65,000 respectively.

The Bishan figure is striking as it was only $40,000 in the official first quarter figures. The Toa Payoh median COV then was $63,500.

Median COV levels for four-roomers in the second quarter ranged from $20,000 in Woodlands to $42,000 in Queenstown according to agency data.

Agency numbers showed Bishan, Toa Payoh, Queenstown and Marine Parade are the red-hot estates, while there are still bargains to be found in Sembawang, Choa Chu Kang, Pasir Ris and Jurong West. The median COVs in these areas have generally stayed around $20,000.

The HDB reiterated yesterday that it is ramping up supply of new flats from 9,000 last year to 16,000 this year to help relieve pressure on the resale market and stabilise it.

Ngee Ann Polytechnic real estate lecturer Nicholas Mak said the effects of the fresh supply will be felt in the medium term, and that prices and COV levels might inch up further before stabilising.

While first-time buyers might feel the pinch of rising COV levels, some home owners are cheering.

'The sellers were very happy as they could downgrade to a three-room flat with the proceeds and buy it without any loans,' he said.

Still, analysts say there will be a resistance level where buyers will stop buying if COVs get too high.