Sydney, Mumbai, Perth, Brisbane, Ho Chi Minh City, Delhi and Shanghai round out the list of the 10 most expensive office locations in the region in the second quarter of 2010.

In the latest Colliers International Asia-Pacific office market overview, the real estate firm says overall office leasing demand in the region showed no sign of abating in Q2, despite the shadow of a sovereign debt crisis in Europe. 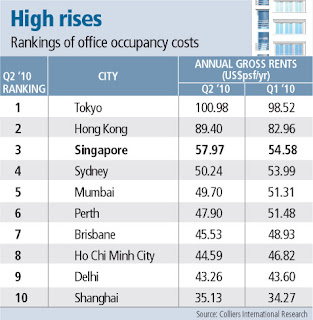 In Singapore, official statistics show the net absorption of island-wide office space was 398,000 square feet in Q2 - a 68 per cent quarter-on-quarter increase from 237,000 sq ft in Q1.

On the back of this, office rents here rebounded 6.1 per cent quarter-on- quarter in Q2 - the third fastest rate of growth in the region. Hong Kong registered the fastest quarter-on-quarter rebound of 8.4 per cent, followed by Wellington at 6.8 per cent.

At end-June, Grade A office space in Singapore's central business district was estimated to command an average monthly gross rent of $6.77 per sq ft.

Besides a flight to quality, the increase in office rents here can be attributed to companies taking advantage of competitive rates and adding space to meet an anticipated rise in headcount, Colliers says.

It expects Singapore's office rents to strengthen a further 10 per cent in the current second half.