Singapore is priciest Asian country to build in: report

Republic is 10th most expensive country to build in worldwide

(SINGAPORE) Singapore is the most expensive Asian country to build in except Japan and one of the 10 most expensive worldwide, according to a new report from EC Harris.

The report does not include values for Japan, as EC Harris did not have any projects there in the past two years. Generally, tender prices in Tokyo are around 20-30 per cent higher than in Singapore and Hong Kong.

Richard Warburton, EC Harris's regional head of cost and commercial management in Asia, said Singapore continues to be the most expensive Asian country except Japan to build in despite a drop in tender prices of 5-8 per cent last year.

'The Singapore market appears to be recovering on the back of sustained demand and strong economic growth,' he said. 'We are also seeing localised 'hot' markets, such as the substantial amount of new office building fit-out activity that is under way.' 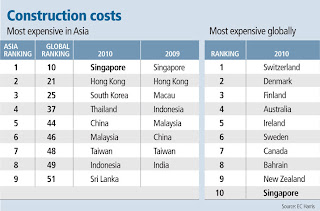 This may create supply chain pressures and lift tender prices further. Mr Warburton expects 3-5 per cent growth in general tender prices over the coming year, although a key factor determining this will be how much commodity prices rise, he noted.

Another property and construction consultancy, Rider Levett Bucknall, predicted in April that building tender prices in Singapore could climb 3 per cent this year.

Analysts have said recent hikes in iron ore prices are likely to lead to higher steel prices. Increases in the foreign worker levy and cut in man-year entitlements will also cause construction costs to rise.

According to EC Harris's survey, which benchmarks the cost of building in each country against the UK, the price of construction in Singapore is almost 7 per cent higher than in the UK, where it fell almost 20 per cent from its peak in the previous year.

Hong Kong is Singapore's closest Asian counterpart on the expensive list. It ranks second in Asia, at 7 per cent below the UK benchmark.

China ranks fifth among Asian countries, behind South Korea and Thailand. At the other end of the scale, Sri Lanka is the cheapest Asian country to build in, at 27 per cent of the cost of UK construction.

According to Mr Warburton, the greatest uncertainty in tender price inflation in Asia exists in Hong Kong.

Construction workloads and tender prices in Hong Kong rose steadily throughout 2009, driven largely by government spending on infrastructure. Now there is a sense that a period of readjustment is on the way, Mr Warburton added.

EC Harris calculated the figures through a survey of construction costs in 50 countries. The survey was conducted across the consultancy's offices worldwide, with data collected in cost per square metre format for a wide range of buildings, including industrial, offices, retail, residential and hotels.