THE improved property market has prompted the Government to raise the fees developers pay to enhance the use of residential sites.

The fee – called a development charge (DC) – closely reflects recent land and property values as it is adjusted every six months.

A developer pays a DC if he wants to intensify the use of a site, for instance, by redeveloping an existing project into a bigger one.

Rising values – and developers bidding aggressively for suburban residential land – have forced the Government’s hand, although the increases were mostly within expectations.

From next Monday, the DC will go up by about 12 per cent on average for landed homes and around 8 per cent for non-landed properties. But the rate for commercial sites has dipped given the muted market.

The new rates highlight the rapid rebound in residential property. The DC for landed homes had not been revised for two years, while the non-landed rate was down 2 per cent six months ago.

Experts say the higher charges will add to developers’ costs and could affect collective or en bloc sales and the conversion of office buildings to residential use.

The DC rises vary across the island. 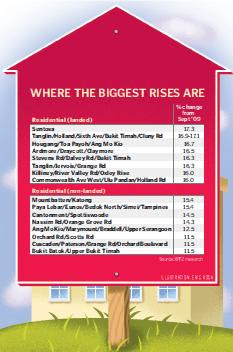 While the average rise for landed properties is 12 per cent, the DC will jump by around 17 per cent in the prime areas of Tanglin, Holland and Bukit Timah, the HDB towns of Hougang, Toa Payoh and Ang Mo Kio, and Sentosa.

The DC for Sentosa rose the most – by 17.3 per cent – this round, supported by the recent strong transaction volume in that area, said Jones Lang LaSalle.

The largest rise in the non-landed homes sector will be a hike of 15 per cent in the mass-market areas of Mountbatten and Katong, as well as in Paya Lebar, Eunos, Bedok North, Simei and Tampines.

This may hamper or derail their land banking plans, he added.

It is a different story in the commercial sector, where DCs will go down 2 per cent on average, with the exception of booming Sentosa, where the rate will go up by 13 per cent.

Rates will fall by up to 13.3 per cent around Raffles Quay and Shenton Way.

The dip for commercial property will be welcomed. The office sector has been subdued, land sales during the review period have been muted and the business environment is still uncertain despite signs of recovery, said Colliers International.

The Central Business District (CBD) will also see the completion of about 2.2million sq ft of office space this year, raising the real threat of a damaging oversupply.

‘A cut in DC rates in these locations will hence provide the necessary stabilising effect to the market, amid daunting concerns about the potential supply,’ said Mr Ho.

Consultants also noted that the fall in commercial DC rates in the CBD will be met with a rise in residential rates.

‘This would affect the conversion of office buildings to residential uses in the CBD, especially those on leasehold land as they would also have to top up the lease,’ said DTZ’s head of South-east Asia research, Ms Chua Chor Hoon.

There are a number of players that are keen to convert and they will have to recalculate their sums as the DC rates have increased, said Mr Ho.

Sentosa is the only area of the country that registered a rise – of 12 per cent – in the DC for the hotel and hospital sector, which will remain untouched everywhere else.

Sentosa is paying the price of the integrated resort, which has pushed up values and, hence, the DC increases in the landed residential, commercial and hotel/hospital sectors, said Ms Chua.

The National Development Ministry sets the rates every March and September in consultation with the Chief Valuer.