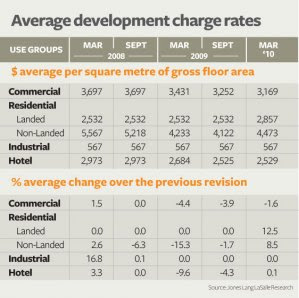 On average, the government is raising DC rates (payable for intensifying or enhancing the use of some sites) about 12 per cent for landed residential use from March 1; but in Sentosa, they will climb 17.3 per cent. For non-landed residential use, Sentosa saw a 10 per cent hike in DC rates compared to the average rise of about 8 per cent. And while DC rates for commercial use will be cut roughly 2 per cent on average against the backdrop of weak office rentals, Sentosa is the only location where they will be raised – to the tune of 12.5 per cent.

It is also the only location where the government increased the hotel-use DC rate; the hike was 12.2 per cent. In all other locations, the DC rate for hotel use (which also covers hospitals) was left untouched.

DC rates – which are revised on March 1 and Sept 1 each year – are specified by use groups across 118 geographical sectors throughout Singapore. The review is conducted by the Ministry of National Development in consultation with the Chief Valuer, who takes into account current market values.

Some analysts pointed to an interesting trend emerging in the Central Business District. DC rates for commercial use in the CBD fell further while non-landed residential rates rose and actually surpassed the commercial rates. This could mean paying a higher DC for those who redevelop old CBD office blocks into apartments and could impact such conversions, especially in the case of 99- year leasehold sites as their owners would also want a lease top- up, says DTZ’s South- east Asia research head Chua Chor Hoon.

Jones Lang LaSalle’s SE Asia research head Chua Yang Liang goes a step further, predicting that the new trend could have an ‘unexpected effect of encouraging the redevelopment of existing older office stock into the same office use and discouraging conversions to residential’. Jones Lang LaSalle’s (JLL) analysis showed that DC rates for non-landed residential use were raised for 116 geographical sectors and left unchanged for the remaining two areas.

The biggest hike of 15.4 per cent was seen in three sectors: 91 (which covers the Mountbatten, Meyer and Broadrick areas); 98 (Tampines, Bedok Reservoir, Bedok North, Kembangan); and 101 (Paya Lebar Way/Eunos/Sims Avenue).

This was followed by Sector 76 (Everton/Spottiswoode Park) with a 14.5 per cent increase. Market watchers attribute this to last October’s en bloc sale of Dragon Mansion at a land price about 68 per cent above the land value implied by the prevailing Sept 1, 2009 DC rate for the location.

Also, the geographical sectors covering Serangoon Ave 3, Upper Thomson Rd and Sengkang West Avenue – where residential sites have been sold at bullish prices at state tenders in the past six months – were raised 12.5 per cent, 10.5 per cent and 9.1 per cent respectively.

Credo Real Estate managing director Karamjit Singh, however, said yesterday: ‘Three quarters of the en bloc projects our company is working on don’t involve any DC payment. As for the rest, DC as a component of the entire land cost is not very high and hence the increase in DC rates will have minimal impact on the en bloc sale exercise.’

For landed residential use too, charges were raised in 116 sectors and left unchanged in the other two.

Besides Sentosa, other areas with the biggest hikes include Holland/Dunearn Rd/Sixth Avenue (up 17.1 per cent) as well as the Good Class Bungalow areas of Botanic Gardens/Gallop Rd/Tyersall and Ridout/Peirce Hill/Swettenham Road (each up 16.9 per cent), JLL’s analysis shows.

Commercial DC rates were trimmed between 3.2 and 13.3 per cent in 23 sectors. The biggest chop was in the Cecil St/Robinson Road area. There were also cuts in other parts of the financial district, such as Marina Bay, Raffles Place and Fullerton Road, as well as in the Thomson/Moulmein, Newton Circus, Bugis and Tanglin/Cuscaden areas.