Some missing out on property boom

SOME developments have missed the price gravy train in the private homes sector and are languishing at levels below their benchmark launch values set more than a decade ago.

Their plight is at odds with the prevailing market, where values are now 1.5 per cent above 1996's record prices.

Part of the problem is that they can look like poor cousins compared with the flashy new estates being built now, but many were also launched amid a property boom when speculators sent prices soaring to unsustainable levels. 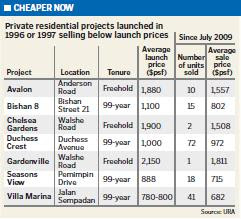 One of the laggards is Far East Organization's 99-year leasehold Bishan 8, which stunned market watchers when it was sold at an average of $1,100 per sq ft (psf) in June 1997.

That was a record selling price then for a leasehold condo outside of the traditional prime areas.

However, caveats lodged with the Urban Redevelopment Authority found that despite the development's selling points - its proximity to Junction 8 mall, Bishan MRT station and Raffles Institution, for instance - prices have struggled to reach their peak.

The 15 units sold since July last year averaged $802 psf. The most recent transaction was a 1,163 sq ft apartment that sold for $912 psf last month.

Owners at City Developments' freehold, 40-unit Chelsea Gardens are in a similar position.

Prices were even lower in August last year, with the second most recent transaction of a 2,508 sq ft unit going for just $1,396 psf.

Property experts said apart from some of these developments being about 10 years into their 99-year lease, which inevitably resulted in a depreciation in value, they were also launched at peak prices during a period where speculative activity was high.

'A few projects were sold at the peak of the cycle in the light of strong speculative activity, with a lot of sub-sales in the market,' said Mr Steven Tan, executive director of residential at the OrangeTee agency.

'Some of these projects were launched at future prices,' he added.

PropNex chief executive Mohamed Ismail said consumers were now spoilt for choice and lifestyle options with the slew of new property launches that have inundated the market in recent months.

'The price index includes new properties which buyers are willing to pay more for... It might take a longer time for a second-hand product to climb up to the level of the current price index,' he said.

Older projects are often sold at about 10 per cent to 20 per cent less than a new project nearby, Mr Ismail said. However, if they are in a good location, they are likely to fetch break-even prices eventually, even if they are 20 years old.

Ngee Ann Polytechnic real estate lecturer Nicholas Mak added that properly maintaining an older project is vital to its selling price. However, buyers may still prefer new launches if they feel that the design of an older condo and its facilities have become dated.

Some experts also point out that certain popular areas in the past have lost some attention as new residential enclaves such as Dakota and West Coast compete for the attention of buyers.

'Buyers are more open these days and might decide to invest in an area they see growth potential in, such as the Jurong Lake district, rather than buying an older condo,' he added.

Prices are expected to continue to edge up this year, given the positive economic outlook, property experts forecast.