Shopping for investments? You can invest in these shops

THE number and value of strata shops and shophouses transacted in the first half of this year are down slightly from the preceding half-year, shows a study by Knight Frank.

However it predicts the full-year 2010 tally will surpass that for 2009. Assuming businesses continue to be optimistic, this will support demand among entrepreneurs for this property class, says Knight Frank executive director Mary Sai. 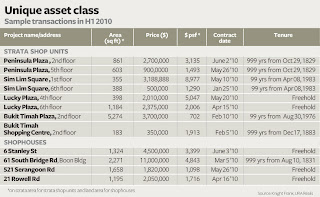 The property consultancy group's study did not include HDB shops and shophouses.

The most popular haunts for strata shop deals in H1 this year include Peninsula Plaza at North Bridge Road and Sim Lim Square, with 12 caveats each.

The most expensive transaction (in terms of per square foot of strata space) in January to June this year was $8,977 psf for a ground-floor unit at Sim Lim Square facing the escalator and main shopping concourse. The 355 sq ft unit was transacted at $3.19 million in May.

The majority of strata shops transacted in H1 2010 were in the lower price range, in line with the historical trend. Units priced below $1 million made up 64 per cent of transactions.

Ms Sai sees a modest increase of about 5-10 per cent in the number and value of strata shop transactions for the whole of this year compared with 2009. 'Some owners may want to unlock their values, especially for properties with shorter balance leasehold tenure and those where values have rebounded substantially from the trough.'

While many of these 99-year shop units are in ageing shopping centres, they have a vibrant, bazaar feel, marked by haggling with shopkeepers and an eclectic tenant mix, which wows some shoppers, says DTZ executive director (consulting) Ong Choon Fah. One factor that has helped to hold up values of this property class is limited stock since over the past two decades, developers by and large have stopped selling shop units in their mall.

Property values tend to hold better in malls which are held under single ownership as that allows better control on management and tenant mix. As well, strata-titling individual shop units and selling them will entail setting up a sinking fund and collective decision of subsidiary proprietors for major matters like substantial works, or a collective sale, Mrs Ong points out.

'Buying interest in shophouses will remain strong due to limited supply and the flexibility of usage - for retail, office, boutique hotel or residential,' Ms Sai said.

Ms Sai says that most of this year's shophouse transactions were in Chinatown, Little India, Kampong Glam, Geylang and Joo Chiat.

Industry players highlight that those thinking of buying strata shop units or shophouses will have to use cash resources and/or bank loans; the use of CPF savings for the purchase of non-residential properties has been phased out since July 1, 2006.

DTZ's Mrs Ong also advises those eyeing shophouses to do their homework or engage a seasoned property consultant. 'Some shophouses are very old and may not have been renovated; you'll have to check if they are structurally sound.

'You should also check with Urban Redevelopment Authority whether you are allowed to build a taller rear extension.'

Potential buyers should also study the profile of surrounding uses and occupiers to see if they are compatible with their intended use. One drawback about shophouses is a lack of dedicated carpark lots, so occupiers and their guests usually rely on street carparking or public carparks.

Only about a quarter of H1 2010 shophouse deals involved 99-year leasehold properties, 'reflecting buyers' strong desire to have a lasting interest in a freehold shophouse', according to Ms Sai.

Shophouses will remain favourable for buyers, underpinned by their limited supply and unique design and architecture, she reckons. 'When you buy a shophouse, especially if it's in a conservation area, you also own a piece of history,' she said.