Rents at suburban malls catching up with Orchard Rd

(SINGAPORE) Rents at suburban malls in Singapore are fast catching up with those for prime Orchard Road retail space as neighbourhood malls draw increasing shopper numbers and more interest from tenants. 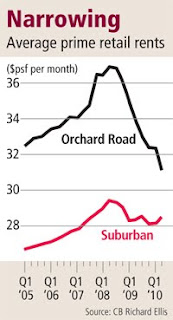 The rental gap tightened as Orchard Road rents fell for the seventh consecutive quarter while suburban rents continued to edge up in the second quarter of 2010, CBRE's data shows.

Suburban malls, on the other hand, saw a 1.4 per cent quarter-on-quarter increase in prime rentals to $28.50 psf pm.

And when it comes to retail space on the upper floors, suburban malls are in fact fetching more than their Orchard Road and Scotts Road counterparts.

Analysts said that rents in the Orchard Road area are depressed after a large amount of new supply - from malls such as Ion Orchard, 313@somerset and Orchard Central - came onstream over the past year.

'Competition in the Orchard Road and Scotts Road and other city areas has intensified and the increased range of retail choices has rendered consumers to be more selective in their purchases,' said Anna Lee, DTZ's associate director for retail.

'Retailers, particularly in the newer malls, are adjusting to the vagaries of consumer preferences and resulting in early termination of leases in some cases,' she added.

In contrast, rents in the suburban areas continued to edge up in the second quarter of 2010. Suburban malls, with their built-in catchment of shoppers and mass market offerings, largely performed better than malls in the city during the financial crisis.

These malls, which draw more and more shoppers every year, are now able to command higher rents from tenants.

'Generally, 2009 shopper traffic at our suburban malls is higher than that in 2008,' said a spokesman for CapitaMall Trust (CMT). CMT has eight suburban malls in its portfolio.

The increased visitor numbers have translated into higher rents for both retail trusts.

FCT said that in the first six months of its 2010 financial year (October 2009 to March 2010), its portfolio achieved average rental reversions of 4.5 per cent. And for the suburban malls in CMT's portfolio, the rate of average rental growth per year ranged from 1.1 per cent to 2.3 per cent in Q1 2010.

Developers are extremely bullish on the potential of suburban retail space here.

Australian developer Lend Lease, which paid $749 million for a mixed-use land parcel in the Jurong Lake district, intends to build a suburban shopping mall on most of the site.

Lend Lease, which owns the 313@somerset and Parkway Parade shopping malls here, is required to set aside a mandatory 30 per cent of the gross floor area for office use. But the remaining 70 per cent will be used solely for retail space, said Ooi Eng Peng, executive officer for retail and investment management in Asia for Lend Lease.

'The mall will be the Parkway Parade of the west,' Mr Ooi said. Suburban malls offer good prospects for developers who can come up with the right tenant and product mix for the surrounding catchment population, he added.

'We expect prime Orchard Road rents to dip 5 per cent to 10 per cent in 2010 due to the settling of business and trading patterns,' said Letty Lee, CBRE's director for retail services. 'But prime suburban rents are likely to see a 3-5 per cent upside in the same period, underpinned by catchment demand.'

But it is not all doom and gloom for malls on Singapore's best-known street; analysts expect that over the next two to three years, rents in the Orchard Road will rebound.