Flash estimates released yesterday said that private home prices in Singapore rose 5.2 per cent in Q2 2010 after climbing 5.6 per cent in the first three months of the year.

This brings the Urban Redevelopment Authority's (URA) price index for private residential property to 184.1 points - 1.5 per cent higher than the previous pre-Asian crisis peak of 181.4 points in Q2 1996. 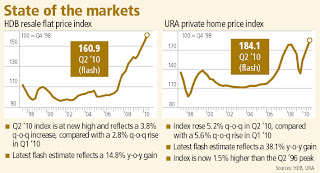 Prices of resale HDB flats also continued to climb and set another record in the second quarter. Resale prices rose a steeper 3.8 per cent in Q2, higher than the 2.8 per cent climb seen in Q1.

For the private residential market, homes in the 'outside central region' (a proxy for suburban mass- market locations) led the price increase with a 5.7 per cent quarter-on-quarter climb in Q2.

While prices climbed across all three regions, analysts pointed out that recent government measures to cool the market have worked to some extent as the price growth has now slowed down for three consecutive quarters - although the deceleration in growth has been slower than what was hoped for, particularly in the mass- market segment.

'There will be a time lag before we will see a more moderate increase in prices,' said Knight Frank chairman Tan Tiong Cheng. 'The market has been positive but the government has mitigated this by providing a lot of land. But the supply needs some time to come onto the market.'

There is also increasing price resistance, as demonstrated by the more than 50 per cent drop in sales of new homes in May. This should help to further moderate price increases - especially in the mass-market segment - to within 5 per cent for each of the next two quarters, said Tay Huey Ying, Colliers International's director of research and advisory.

Jones Lang LaSalle's head of research for South-east Asia, Chua Yang Liang, added: 'Overall, the falling sales volume in both primary and secondary markets suggests that the overall URA property price index, a lagging indicator of demand, may soften in the next few months.'

Developers sold just 1,078 private homes in May - about half the 2,208 units they transacted in April.

Analysts also said that further anti-speculation measures are unlikely as prices in the primary market, which are thought to be a better reflection of current market sentiment, are pointing towards a slowdown. Most analysts expect private home prices to rise a total of 12-15 per cent for the whole of 2010.

But for the HDB resale market, it is a very different story. The rate of price growth seems to be increasing.

The 3.8 per cent increase in prices in Q2 to another new high can be attributed to higher cash- over-valuation (COV) amounts, industry players said.

HDB on Wednesday said it has launched 2,696 new build-to-order (BTO) flats to ensure that there is an adequate supply of new flats to meet housing demand - the largest number of such flats ever offered at one go.

But this might not satisfy demand from all corners.

'Though HDB has increased the supply of new flats, these cater predominantly to the first-timers and those who can wait three years for these new flats to be built,' said ERA's Mr Lim.

'For upgraders, permanent residents and those who have immediate housing needs, the resale market is the only source.'

He expects HDB resale prices to increase 12-15 per cent for the whole year.