Experts expect more rises this year but at a slower rate

PRIVATE home prices in Singapore are now at their highest level ever, eclipsing even the previous 1996 peak.

Prices, now 1.5 per cent above the 1996 high, are expected to continue to edge up this year given the positive economic outlook, property experts forecast.

But the rises should moderate as the market is no longer feverish, having slowed to a more sustainable level with many more sites on the way, they said. 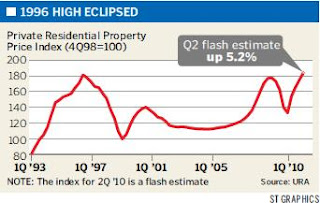 The Government has lined up a record amount of land for sale in the second half of the year and yesterday released three sites for sale.

One is an executive condominium site in Jurong West which can yield about 460 units. The other two sites are in Miltonia Close and Bedok Town Centre. Together, they can yield about 1,300 homes.

Other data out yesterday showed that Housing Board resale prices rose 3.8 per cent to a new record high in the same period, giving strong support to 'mass market' private homes - generally the less expensive private homes. This came after HDB this week offered 2,696 build-to-order flats in its largest ever single launch.

Preliminary estimates released yesterday by the Urban Redevelopment Authority (URA) showed that mass market non- landed private homes rose at a faster clip of 5.7 per cent to a new high, compared with 4.3 per cent in the first quarter.

Mr Tan said this could be attributed to higher price levels set at new launches such as Tree House and The Minton, as well as rising prices of resale deals in areas where several government sites had been sold in the past six to nine months.

In central Singapore, non-landed home prices moved up 5.1 per cent, from 4.4 per cent in the first quarter. It was only in city fringe areas that prices of non-landed homes rose at a slower 4.5 per cent, compared with a furious 7.9 per cent first-quarter jump.

'Individual sellers on the resale front, especially those who had bought their properties before the 2007 boom, are now making capital gains in the region of 80-90 per cent,' noted ERA Asia Pacific associate director Eugene Lim.

Since late May, there has been a sales slowdown owing to the euro zone crisis, a lacklustre stock market and high asking prices, but home prices have generally remained firm. Sales of new, private homes halved to 1,078 units in May, from April.

Mr Lim said developers are unlikely to cut prices for new launches to sell more units as most have strong balance sheets.

Still, the slower sales will affect sentiment, said Cushman and Wakefield managing director Donald Han. The pace of price rises will slow down with the resale market first to be hit. The full effects will be felt from this quarter, he said.

For the whole year, property experts are mostly looking at price increases of about 15 per cent. Estimates range from 12 per cent to as much as 20 per cent.

'After the football World Cup season, people will look at whether the West is coping well and Singapore's economic growth and policies. Economists revising higher their growth estimates means that prices are likely to rise,' said Knight Frank chairman Tan Tiong Cheng.

'On the other hand, ample supply has translated to developers being more selective in bidding for sites. Land costs would come off and that would mitigate price rises six months down the road.'