FAR East Organization has signed a deal to buy 31 Parbury Avenue off Upper East Coast Road for $55 million - a price that works out to $898 per sq ft of land area.

A two-storey bungalow stands on the sprawling 61,240 sq ft freehold site, which can be redeveloped into eight luxury bungalows or a strata landed-housing scheme comprising either 14 bungalows or 28 semi-detached houses or 37 terrace houses, according to CB Richard Ellis, which brokered the sale.

Depending on how intensively Far East redevelops the site - beyond a baseline plot ratio of 0.7 - a development charge may be payable. 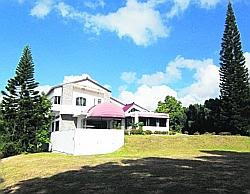 The plot is zoned for three-storey mixed landed use under Master Plan 2008.

There are also a few condos in the area, such as Parbury Hill Condominium and Riviera Residences, although these are on residential sites with a 1.4 plot ratio - on which non-landed residential developments are allowed - under Master Plan 2008.

CBRE marketed 31 Parbury Avenue through a tender that closed in late May and is said to have attracted a handful of bids.

The property is being sold by the family of the late Goh Seong Pek, one of the founders of Tat Lee Bank.

Sales of residential sites have been picking up as developers seek to restock landbanks following strong housing sales last year. Besides the Government Land Sales Programme, collective sales and other private-sector sources have been providing residential land for developers.

BS Capital recently bought the Colourscan Building in Kim Keat Road in the Balestier area with a view to redeveloping the 32,544 sq ft freehold site into a 20-storey apartment project. The Urban Redevelopment Authority has approved a rezoning of the site from Business 1 to residential use with 2.8 plot ratio - the ratio of maximum potential gross floor area to land area. BS Capital's purchase price of just over $36 million reflects a unit land price of $670 per sq ft of potential gross floor area, including an estimated Development Charge (DC) of almost $25 million.

In District 9, Cavenagh Mansions, which comprises 21 apartments, has been sold by Teck Jin - which developed the project about 20 years ago - to Selangor Dredging for $42.38 million or about $1025 per sq ft of potential gross floor area including an estimated $267,000 DC. The Malaysian company plans to redevelop the freehold site.