A breather for home sales in lazy June

(SINGAPORE) Students were not the only ones taking a break during the mid-year school holidays. Home seekers also slowed their pace, buying just 847 private homes from developers in June.

But market watchers are hardly fretting as they expect purchases to pick up slightly in July before the Hungry Ghost Festival is celebrated.

Also, overall sales for the first half of the year have been strong. Developers offloaded 8,584 units from January to June - an average of 1,431 monthly. They did better compared with the same period last year, when they sold 7,374 units in total or an average of 1,229 monthly. 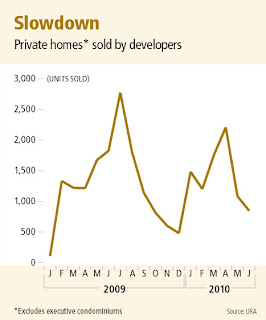 Purchases had started falling in May as the euro debt crisis and high prices caused interested buyers to think twice.

According to flash estimates from the Urban Redevelopment Authority (URA) two weeks ago, the private residential property prices index hit a new high in Q2, past the pre-Asian financial crisis peak.

Then there were other distractions - the football World Cup and the school holidays - which could have persuaded developers to hold back launches. They rolled out 1,010 homes in June, down 11 per cent from 1,135 in May.

Buying activity was concentrated in the suburbs, reflecting market caution. Home hunters bought 429 homes in the outside central region, accounting for 51 per cent of total sales. These included 77 units from Waterfront Gold at Bedok, which made its debut in June.

In the rest of central region, developers sold 275 units or 32 per cent of the total. Activity was quietest in the core central region with 143 units or 17 per cent sold.

Property consultants believe developers may sell slightly more homes this month, with the World Cup and school holidays over.

Also, the Hungry Ghost Festival arrives in the second week of August. There might be 'superstitious buyers looking to pick up homes in July ahead of the inauspicious home-buying period', said Colliers International research and advisory director Tay Huey Ying.

DTZ executive director (consulting) Ong Choon Fah added that strong economic growth in Q2 could boost market sentiment. On Wednesday, the government revised its GDP growth forecast for the year to a range of 13-15 per cent, up from 7-9 per cent.

CBRE's Mr Li noted that sales in the third quarter have 'started well'.

At UOL Group's Terrene in Bukit Timah, more than 100 homes out of 130 soft-launched since July 8 have been sold. The average price is $1,250 psf and demand came mainly from Singaporeans, especially those with private home addresses. UOL will officially release 42 units for sale today.

While the market could get better in July, few consultants expect buying activity in the coming months to revisit highs reached earlier in the year.

'Buying interest will remain selective, depending on the location and product attributes as well as price points of new launches,' CBRE's Mr Li said.

Price resistance could keep some buyers on the sidelines. 'Bargain hunting is likely to be the main focus of buyers,' said Chua Yang Liang, South-east Asia and Singapore research head at Jones Lang LaSalle.

To some extent, home sales are driven by the number of property launches, said DTZ's Mrs Ong. She expects launches in the mass market to continue because developers who recently won tenders for state land may want to roll out their projects before more government sites and more competition come onstream.

But developers of prime freehold projects could hold back launches because there have been fewer collective sales of such sites. They may consider waiting 'for a little while more when they have a bit more pricing power', Mrs Ong said.