18 buyers vie for each 5-room flat at waterfront project

PREMIUM flats at the Housing Board's (HDB) upcoming Punggol waterfront estate has drawn strong interest, with as many as 18 buyers chasing each flat. 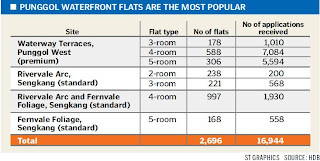 The five-roomers were hugely popular, attracting 5,594 applicants for the 306 flats available, which makes them 18 times oversubscribed.

The 588 four-room flats in the build-to-order (BTO) project were hot as well with 7,084 applications lodged or 12 times oversubscribed.

Almost 50 per cent of the applicants have not applied for any BTO flats in the past 12 months, said HDB.

Waterway Terraces will be premium flats, which means they come with fittings such as timber strip flooring in the bedrooms.

The project also has roof gardens, a relatively rare feature in HDB projects, and direct lift access from all blocks to the basement carpark.

The HDB expected Waterway Terraces to be well received but the big turnout of buyers could not trump the HDB record holder, Telok Blangah Towers. Launched in October 2007, this drew 7,970 applications for 400 BTO flats - or nearly 20 times oversubscribed.

Buyers flocked to the Punggol flats as they are the first along the Punggol Waterway to be released.

They are also within walking distance of the Punggol MRT station and other amenities and boast an award-winning design with various premium and eco-features, the HDB said.

Under the BTO scheme, flats are built only when a certain level of demand for the project is met.

The Sengkang flats were mostly just two to three times oversubscribed but the two-roomers attracted only 200 applications for the 238 units.

The HDB said in a statement yesterday that the absolute number of applicants for the Sengkang projects is comparable with previous BTO launches in the area.

In all, the 2,696 flats in Punggol and Sengkang drew 16,944 applications as of 5pm yesterday. HDB will provide a final update at 2pm today.

Ngee Ann Polytechnic real estate lecturer Nicholas Mak said a key draw is the project's proximity to the MRT station and the future mall there as not all units will have a waterfront view.

'People are still expecting HDB prices to rise. They are thinking if I don't get it now, the future Punggol projects could be priced even higher,' added Mr Mak.

Indeed, Mr Lim said applicants have a first-mover advantage. 'It's the first waterfront project there. Future ones may be priced higher.

'Some people are thinking that they can resell after eight years for a big profit. It's also a lifestyle that you cannot find in any other HDB project.'

PropNex chief executive Mohamed Ismail said the response shows that 'a lot of people now value lifestyle more than just a basic roof over their heads'.

He said buyers are 'willing to pay a premium for (lifestyle) as they also realise that these projects with special features can appreciate in value far more than other standard HDB projects because of limited supply'.

Buyers can look forward to 7,200 more BTO flats this year, the HDB said.