FIVE bidders made a play for an executive condominium (EC) site near Punggol MRT station, with the highest offer within market expectations.

The cautious response is in contrast to recent tenders which attracted a high number of offers or bumper bids from developers keen to get their hands on land, said Ngee Ann Polytechnic real estate lecturer Nicholas Mak. 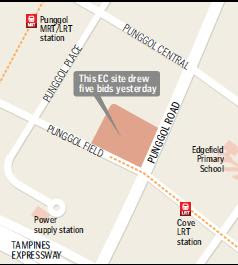 A joint venture between NTUC Choice Homes Co-operative and Chip Eng Seng lodged the top bid of $223.7 million or $308 per sq ft per plot ratio (psf ppr) for the Punggol site.

NTUC Choice Homes yesterday said it plans to develop the 99-year leasehold site at the junction of Punggol Field and Punggol Road into a 17-storey, 600-unit project with full condo facilities. It said it will sell the EC at the prevailing market prices and stated that it is 'committed to provide affordable housing' as the project's breakeven price is around $600 psf.

The site has a gross floor area of 726,477 sq ft and will be the first EC to be offered in Punggol.

NTUC Choice Homes will hold a 60 per cent interest through its subsidiary Choicehomes Investments while Chip Eng Seng unit CEL Development will hold 40 per cent.

Their winning bid is about 50 per cent higher than the trigger bid of $147.7 million and about 4 per cent above the second highest bid of $296.3 psf ppr from Hoi Hup Realty and Sunway Developments.

China-based Qindao Construction was next with $280.5 psf ppr.

The Punggol site is the fourth EC tender this year. The previous three had attracted seven to 11 bids.

In the resale market, units in Park Green, The Rivervale and The Florida were sold at $500 to $620 psf between January and last month, Mr Tay noted.

Besides new families, HDB residents from Punggol New Town will find the EC an attractive upgrade option, he said.

Median prices of HDB five-room and executive resale flats in the area were at $430,000 and $497,500, respectively, in the first quarter of this year, he said.