Developers and buyers headed for a stalemate

Big drop in May sales could signal the start of a slowdown, with neither side in any hurry to transact

(SINGAPORE) Developers sold just 1,078 private homes in May - about half the 2,208 units they transacted in April. This could mark the start of a period of slower sales as developers weigh their options and buyers bide their time.

The two parties could have a standoff for a little while, predicts DTZ executive director (consulting) Ong Choon Fah. 'There's no great push factor to launch projects in June when you weigh the pros and cons. Potential buyers may also hold back purchases as they may not sense a great urgency to buy.'

Agreeing, Knight Frank chairman Tan Tiong Cheng said: 'Developers will try their best to maintain prices; so what if they delay launches for a couple of months? After all, most of them have strong balance sheets and the Singapore economy seems to be continuing to perform well.' 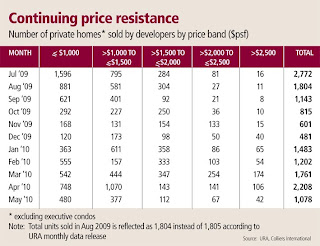 Jones Lang LaSalle's South-east Asia and Singapore research head Chua Yang Liang also points out that 'compared with the collapse of Lehman Brothers in Q3 2008, the impact of the eurozone debt crisis on the Singapore residential market has been less destabilising thus far.'

During the dark days between September 2008 and January 2009, developers sold only between 108 and 376 units per month.

Some property consultants are predicting this month's sales will be under 1,000 units. Including the latest May number, developers have sold 7,666 units in the first five months of 2010.

Even assuming slower sales in June and the second half, consultants predict developers will end 2010 with total sales of 12,000-15,000 units. Primary market sales for the whole of 2009 totalled 14,688 private homes.

A confluence of factors - the June school holidays, the World Cup, the brewing economic crisis in Europe, and the onset of the Hungry Ghosts Month in August - may cause developers to go a bit slower on property launches in the near future, some property consultants suggest.

Also, potential buyers may not see great urgency to commit as the bumper Government Land Sales Programme for the second half of this year means they will have a greater choice of projects to consider in the near future.

'Over the next couple of months, sales could be around 900-1,300 units per month until more positive signs appear to entice buyers back into the market. It also depends on the projects that will be launched and their pricing levels. Already, there's resistance to high prices, particularly in the suburban areas,' says DTZ South-east Asia research head Chua Chor Hoon.

Colliers International analysis also showed buyers' resistance towards higher-priced units continuing in May. The proportion of units priced above $1,000 psf has fallen from 69.2 per cent of developers' sales in March to 66.1 per cent in April and 55.5 per cent in May.

For May, the Rest of the Central Region made up the bulk or 41.8 per cent of homes sold by developers. This was contributed by projects such as the newly-launched Casa Aerata at Lorong 26 Geylang, The Cascadia in Bukit Timah Road as well as continued sales in projects released earlier such as Waterbank at Dakota (52 units) and The Interlace (44 units).

Waterbank at Dakota and Tree House in Chestnut Avenue, which were launched in April, saw sales of 52 units each at median prices of $1,092 psf and $831 psf respectively.

BT's count showed that a total of over 50 units were returned to developers in May.

DTZ's Mrs Ong says that even as developers hold off launches in June, they will watch the market very carefully especially bids at upcoming state land tenders.

'If winning bids ease, developers will have pricing flexibility for their end unit prices. If land prices remain buoyant or even surge further, developers may think they have some respite from pressure to moderate their prices,' she added.