But prices are holding and sales figures are still considered healthy

THE triple whammy of a jittery stock market, the euro debt crisis and high prices put the brakes on the private home market last month.

New sales hit 1,078 units - about half of April's near-record 2,208 units and the lowest monthly level seen this year. 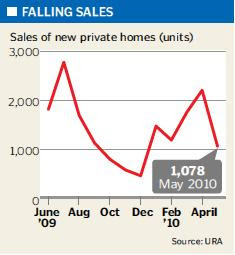 But prices have held up from April and the sales numbers, while substantially down, are considered a good showing.

Analysts believe the market is now in a holding pattern, with developers ready to increase the pace of launches once demand picks up again, perhaps after the school holidays, World Cup and an uptick in Europe's fortunes.

What has changed, said Ngee Ann Polytechnic real estate lecturer Nicholas Mak, is that 'the exuberance is giving way to a more rational buying pattern'.

Last month's figures brought total sales in the first five months of the year to 7,666 units, already more than half the 14,688 units sold in last year's hot market. The record was set in 2007 with 14,811 units sold. Developers launched 1,134 units last month, down from 2,085 in April, according to Urban Redevelopment Authority data yesterday.

Still, buyer resistance towards higher-priced units continued into last month from April, she said. Nearly 80 per cent of non-landed private residential sales last month were priced at $1,500 per sq ft (psf) and below, she noted.

Not surprisingly, the high-end sector was quiet last month, with only 179 units sold, the lowest level this year.

Mid-tier projects on the city fringes garnered the highest sales last month, but the top seller was a mass market project, the 1,145-unit The Minton in Hougang. This new launch sold 204 units at a median price of $849 psf. Other projects all had sales of below 100 units each.

This month will be quieter than last month, with sales tipped to reach 650 to 800 units as buyers turn their attention to the World Cup and the problems in Europe. Other prospective buyers may be overseas for the school holidays.

That will prompt developers to stay selective in their project launches, releasing units in smaller batches, said Ms Tay.

But the slowdown is likely to be temporary, according to Knight Frank chairman Tan Tiong Cheng. 'The property market is holding well. July sales would be a better indication of the market as everybody is taking a breather now,' he said.

CB Richard Ellis executive director, residential, Mr Joseph Tan, said last month's prices have more or less been maintained at April levels and are expected to hold up this month. Knight Frank's Mr Tan also sees stable values ahead, adding that developers are unlikely to push for higher prices in new launches due to the substantial amount of impending land sales.

The Government will be releasing a record amount of land in the second half of this year. Most experts expect new home sales to hit 12,000 to 14,000 units for the year.