DEVELOPERS have again lodged bids above market expectations for a suburban residential site, this time at Hougang, with a top bid of $207.5 million.

However, the seven bidders competing for the 3.02ha plot in Hougang Avenue 2 were fewer in number than for some recent hotly contested sites. 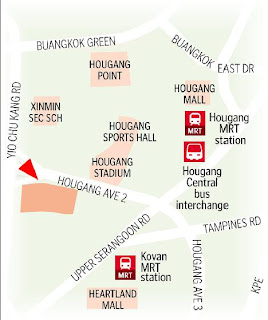 One recent tender in Simei attracted a sizzling 18 bids.

Ngee Ann Polytechnic real estate lecturer Nicholas Mak noted that developers appear to be rather selective in their choice of sites.

'Only those development sites that are near to MRT stations attract more than 10 bidders,' he said.

The site is about 10 minutes' drive from Hougang and Kovan MRT stations.

When the tender closed yesterday, the top bid for the site was from MCL Land (Serangoon), the Urban Redevelopment Authority (URA) said.

MCL Land's bid is about twice the minimum trigger bid and nearly 10 per cent above Frasers Centrepoint's bid of $189.29 million or $416 psf ppr.

Sim Lian Land made the lowest bid of $171 million or $375.8 psf ppr - but still above some analysts' expectations. Property experts had predicted bids of as low as $310 psf ppr to as high as $440 psf ppr.

The plot is slated for development into an estimated 385 units in apartment blocks of up to five storeys in height, or landed homes of up to three storeys.

It has a 99-year lease, is located adjacent to Hougang HDB town and is surrounded mostly by landed homes such as Princeton Vale.

The apartment developments in the neighbourhood include Nouvelle Park, Toho Green and the soon-to- be completed Fontaine Parry.

Said CBRE Research executive director Li Hiaw Ho: 'While the number of bids, at seven, was within expectations, the bid prices are fairly bullish.'

He said the top bid will translate to a break-even cost of about $780 to $800 psf for a low-rise condominium project.

The new project could probably fetch about $900 to $950 psf when it is launched next year, he added.

Other experts estimate the break-even cost at up to $820 psf.

Recent launches of freehold apartment projects in the vicinity, like the 50-unit D'Pavilion, the 81-unit Residences Botanique and 33-unit Wembly Residences, were sold at average prices of $930 psf, $1,000 psf and $870 psf respectively from January to April this year, he noted.

A 99-year leasehold project in the area, Kovan Residences, was sold at $900 psf on average in the same period.

Mr Li said the successful bidder could also choose to develop a cluster project of about 200 units on the site.