ON THE commercial property front, JTC said yesterday that a 1.8ha site next to the Buona Vista MRT station will be launched for sale soon.

Located in the one-north biomedical hub, it was made available for sale on the reserve list in April 2008 but has only just been triggered by a developer which pledged to bid no less than $320 million. 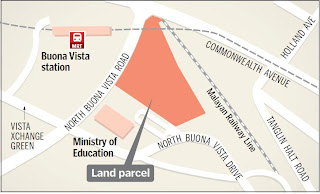 The 99-year leasehold site has a potential yield of 111,565 sq m, with 2,000 sq m to be set aside for retail use. It is to be developed into a high-rise commercial building.

Cushman & Wakefield managing director Donald Han is expecting bids to come in between $300 to $320 per sq ft per plot ratio (psf ppr). The trigger bid works out to $266.50 psf ppr.

His expectations are a lot lower than the numbers of $350 to even $500 psf ppr that analysts had forecast in April 2008.

'There may not be many bidders as the quantum is large for a suburban commercial site,' he said.

'It could be triggered by a developer which has been tasked by a client to build-to-suit for an occupier or someone who wants to use it for himself.'

DTZ head of South-east Asia research Chua Chor Hoon said: 'The office sector is showing signs of bottoming out, hence there is increasing interest to buy or develop office buildings before the market rebounds.'

She said the attractive site will offer a cheaper alternative for companies that do not need to have a Central Business District presence.