SINGAPORE'S economy blazed ahead during the first quarter of the year, beating the most optimistic of projections.

Driven by a massive surge in manufacturing, the economy surged by 15.5 per cent from a year ago and 38.6 per cent from the previous quarter - in both cases the largest output jumps on record.

Providing the ongoing debt crisis in Europe does not worsen, Singapore's growth for the whole year could outstrip the Government's official forecast of 7 to 9 per cent, the Ministry of Trade and Industry (MTI) said yesterday. 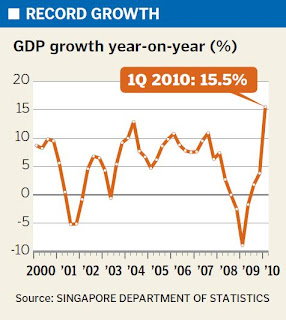 The American economy's continuing resurgence, the likelihood of ongoing growth in Asia, and the ramping up of global electronics demand are all key factors pushing the Republic's economy higher, notes MTI.

But the ongoing debt crisis in Europe - Singapore's largest export market - plus a spike in Asian asset prices have led the ministry to decide against hiking its current forecast, MTI Permanent Secretary Ravi Menon said.

'If the financial crisis in Europe does not deepen further, the momentum of the global recovery that we're seeing now suggests that we could exceed the... forecast range. But we cannot make that assumption,' he said.

'If the sovereign debt crisis worsens and sets off a larger turmoil in global currency and financial markets, Singapore will be affected.'

Three possible scenarios for Europe were outlined by Mr Menon yesterday, with two of them already factored into Singapore's official 2010 growth forecast.

The first sees the present sovereign debt storm quickly contained and Europe resuming its recovery, and the second envisages the crisis spreading to other European economies and growth in the region and Asia slowing.

But the third, and worst, scenario paints a picture of Europe's debt woes morphing into a full-blown financial crisis, resulting in a general liquidity crunch that spreads beyond Europe's borders.

'That's not been ruled out, but it's not something we've factored into the forecast because that would be a distinctly different scenario,' Mr Menon said.

Economists fear that Singapore's vibrant economy is likely to be buffeted if Europe's current problems escalate.

UOB economists Chow Penn Nee and Jimmy Koh yesterday warned that a 1 per cent drop in the European Union's gross domestic product (GDP) could result in Singapore's exports to the EU diving 2.8 per cent. With the declining euro making Singapore's exports pricier, they also estimate that a 1 per cent fall in the euro against the Singapore dollar would see exports to the EU decline 1.6 per cent.

Singapore's export shipments to the United States and Asia could also be hit, given that they buy intermediate goods from here on their way to a final destination in Europe, said Ms Chow and Mr Koh, who are keeping to their 2010 growth projection of 7.5 per cent.

And, on the back of what Barclays Capital economist Leong Wai Ho calls a 'cautious' mood among Government officials, in contrast to the 'noticeably upbeat' tone a month ago, most private sector economists are also maintaining their existing forecasts.

But Citi's Kit Wei Zheng has raised his 2010 estimate by 0.5 percentage points to 9.5 per cent, just above the official figure. He reckons that given the upward first-quarter revision, 'even if growth for the rest of the year is flat, full-year growth will still reach 9.7 per cent'.

Excluding Europe, the rest of the world continues to rebound from the downturn, so the Government has lifted its projection for total trade this year.

Trade agency IE Singapore sees total trade growing 14 to 16 per cent this year - up from a previous forecast of 9 to 11 per cent - with exports expanding by 15 to 17 per cent.

The manufacturing sector, which accounts for a fifth of Singapore's economy, recorded its biggest-ever jump in output in the first quarter. MTI said it grew by 32.9 per cent from a year ago, and by a whopping 157.6 per cent from a quarter ago.

Services, which make up 70 per cent of the economy, grew by 10.9 per cent in the first quarter over a year ago, driven by a financial services and wholesale and retail trade.