It became much cheaper for industries to rent a space in Singapore last year than in cities such as Tokyo, Hong Kong or Sydney.

In Cushman & Wakefield’s global ranking of industrial space occupancy cost, Singapore fell sharply to 18th from fifth place in the previous year. Industrial rents on the island had slipped more than in several other cities as demand for space from the trade and manufacturing sectors weakened from the downturn. 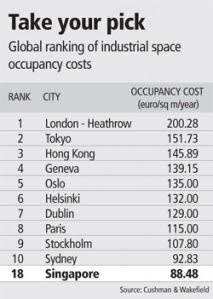 According to the property consultancy, the annual industrial occupancy cost here was 88.48 euros per square metre (S$169 psm) last year. Rents were down about 16 per cent year-on-year.

The drop ‘places Singapore in a more favourable position to attract new demands with its greater cost competitiveness and availability of quality space,’ said Cushman & Wakefield Singapore’s managing director Donald Han. Many other regions in the world also suffered drops in industrial rents. Cushman & Wakefield noted that globally, rents fell by an average of 5.5 per cent in 2009.

Nonetheless, industrial rents in London’s Heathrow stayed relatively constant and the area kept its position on top of the list with the most expensive industrial space. The occupancy cost there was 200.28 euro psm per year.

Apart from Tokyo and Hong Kong, the only other Asia-Pacific city to make it to the top ten was Sydney, where the annual occupancy cost was 92.83 euro psm.

As global economic conditions stabilise, Cushman & Wakefield expects to see industrial rents increase towards the end of this year, ‘the extent of which will be driven by the speed in recovery of global export activity’.

But Singapore may not see rents rise until the second half at the earliest, the consultancy said.

He has seen rental activity pick up in the last few months, but that mainly involved companies moving to other premises, he said. The emergence of new demand for space would give an indication of rents firming up, he added.