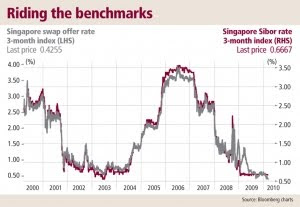 A skirmish of sorts has broken out on the home loans front with banks pushing down their interest rates a notch or two over the past week or so. The first volley was fired by DBS Bank and the others have responded.

This is welcome news for home owners and investors who are looking to re-price or refinance their home loans. The rates also provide a positive backdrop to the upturn in the property market. But advisers are telling clients to be prudent and watch their debt servicing ratios.

To date, it appears that Maybank is offering the most attractive loan rates in terms of variable rate loans – and not just for the first ‘honeymoon’ year. Maybank’s package, which is based on an internal board rate, starts from 1.18 per cent for the first year and edges up to 2.28 per cent in the third year.

For those who prefer a more transparent benchmark rate – typically Sibor (Singapore interbank offered rate) or SOR (Singapore swap offer rate) – the spread over the benchmarks has plunged to 0.5 per cent. DBS uses Sibor and OCBC uses SOR.

As always, there is no free lunch. Lower rates usually come with shorter lock-in periods. Borrowers who want certainty in the rate they pay over a longer period should be prepared to pay more and be locked in for two to three years.

The big question is the direction of interest rates. The widespread expectation among home owners is that rates will head up at some point in the next year or two. Rates are currently close to their all-time lows over 10 years. Between March 2000 and 2009, the lowest points for Sibor and SOR were 0.56 and 0.54 per cent, respectively, in 2003. Today Sibor and SOR are not much higher at 0.66 and 0.42 per cent, respectively.

Alvin Liew, economist at Standard Chartered Bank, says the 3 month Sibor rate could stay below one per cent over the next two years, in line with the bank’s expectations for USD Libor.

‘Moderate loan demand and ample SGD liquidity will also help to keep rates low. While we believe there is a possibility that the Fed would increase further the discount rate spread over the Federal Funds Target Rate (FFTR), this should be viewed as a continuation of financial market normalisation, and not signalling any change in the FFTR until late 2011.’

OCBC’s head of treasury research and strategy Selena Ling says any upward rate movement is likely to be ‘quite gradual’. ‘The liquidity story is still intact, and none of the central banks are really talking about aggressive tightening.’

Sibor reflects the interest rate that a bank charges another for the excess SGD it does not need. It is influenced by US interest rates and domestic loan demand, says Mr Liew.

SOR, on the other hand, includes bank funding costs. It is typically slightly higher than Sibor; but the last few months have seen SOR fall below Sibor. While most banks peg their benchmark rates to 3 or 12 month rates, Citi is even giving customers a choice of one month Sibor.

Mortgage adviser Patrick Tan of Morgan Mortgage International is advising home owners not to leap too quickly into a long fixed rate contract as the differential in servicing costs between a floating and fixed package can be substantial. ‘Even if the variable Sibor or SOR rate does move up, it will not move up too much or too quickly unless we see an inflationary scenario in our economy.’

Fixed rate packages start at about 1.25 per cent for Stanchart, but only for one year. The second year moves to a Sibor-plus rate. OCBC and Citi’s two-year fixed rate are currently at 1.88 per cent per annum, with a two-year lock-in.

DBS says its fixed rate packages remain ‘very popular’ with about 60 per cent of customers opting for them. Says a spokesman: ‘The response is not surprising as they were designed specifically to give home owners both the certainty in repayments over three years, and the flexibility to make partial repayments. The flexibility is usually not found in fixed rate packages.’

Citi said it continues to offer an interest offset feature where deposits in the offset account earn an interest which can be offset by up to 70 per cent against the loan rate. Says Vibha Coburn, Citi business director for secured finance: ‘Our packages are tailored to our customers’ needs… and we advise customers to take a long term perspective when planning their home loans, rather than go for the lowest price points.

Meanwhile, banks have also speeded up loan approvals. DBS says more than 50 per cent of loan clients get their loans approved with an offer letter within the same day.

Stanchart says it offers ‘approval in principle’ within 15 minutes at showflats, which it says is a first. A spokesman says: ‘This way customers know how much they can afford to borrow without over-leveraging.’ In-principle approval is based on basic information such as monthly ncome and other financial commitments. Final approval is subject to necessary documentation.

Providend’s head of financial planning Eddy Cheong is advising clients to follow the prudent path. ‘For a start, do your budgeting and know your limits. Don’t assume interest rates will stay this low. Make sure you can still afford the loan if interest rates go up to 3 to 4 per cent.’ The annual debt repayment over annual salary ratio should ideally be less than 35 per cent. Anything above 45 per cent is seen as excessive, he says.