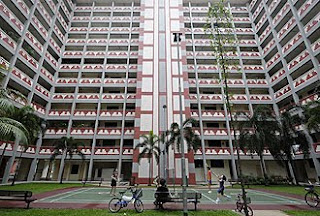 PERMANENT residents looking to buy an HDB flat may have to widen their search beyond popular areas as some parts of the island have already reached the limits set out in the new quota system.

PRs will not be able to buy flats in certain areas in Jurong West, Choa Chu Kang, Sembawang, Sengkang or Bukit Batok unless they are prepared to pay a premium over the asking price in the hope of enticing other PRs to sell.

The areas have long been popular with PRs but some neighbourhoods and blocks are at the limit outlined by the Singapore Permanent Resident (SPR) quota introduced earlier this month.

It sets a cap for PR households of 8 per cent in each block and 5 per cent within each neighbourhood to prevent enclaves of foreigners forming in the heartlands.

A non-Malaysian PR, for example, is eligible to buy a flat from any seller in Clementi Avenue 6. But he can buy only from a fellow non-Malaysian PR at Bukit Batok East Avenue 3 because the quota for the proportion of non-Malaysian PRs in that area has already been reached.

PRs comprise about 14 per cent of the population in HDB flats, according to 2009 figures.
Property experts say the quota system might cause greater disparities in prices, not just among neighbourhoods, but within a block as well.

The Ethnic Integration Policy - which sets ratios for ethnic groups to ensure a balanced mix in housing estates - has also had a similar effect.

PropNex chief executive Mohamed Ismail said that PRs selling HDB flats in neighbourhoods or blocks that have reached their quota will be able to quote a higher price when selling to other PRs.

'Assuming PRs can afford it, they might be willing to pay for a flat that might be nearer to good schools or the MRT, or to get a good view. But if the quota is reached they won't be able to buy unless they offer a higher price.'

However, this effect is not expected to be big enough to affect general market trends, said Chesterton Suntec International's research and consultancy director, Mr Colin Tan. 'Some people will be willing to pay more to live with those from their country, but how much more is very subjective,' he said.

Property agents say being near others of the same nationality is not a major pull factor for PRs. Cost and distance from their workplace weigh more heavily.

PRs from Myanmar like Jurong West because they work in nearby shipyards, offices and factories while Filipinos choose Jurong West, Simei and Bukit Panjang for the relatively cheaper prices.

PRs from Malaysia and China are scattered islandwide. Their key considerations are mainly cost and proximity to work, transport options like an MRT station or bus interchange and facilities such as schools and supermarkets.

Mr Jeffrey Hong, HSR International Realtors' executive director of agency, said some PRs might consider moving elsewhere if the asking price over valuation is too high.

The Jurong estate, for example, has seen a 15 per cent rise in HDB prices over the past nine months, he said.
Chinese PRs might move from Jurong to areas like Yishun and Woodlands while Indian PRs might move from Serangoon to nearby Hougang and Lorong Ah Soo if quotas were soon to be reached.

'These places are less pricey and also not that far from their ideal location,' Mr Hong said.