THE tender for a transitional office site in Mohamed Sultan Road closed yesterday with a top bid almost four times greater than an offer received in 2008 when the property failed to sell. 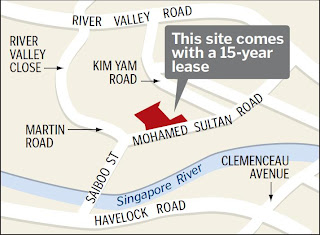 The land between Kim Yam and Martin Roads comes with a shorter-than-usual 15-year lease.

It can accommodate a four-storey building with a total floor area of almost 100,000 sq ft.

The site was triggered for launch in late January at a minimum price of $9.33 million.

Property experts had suggested then that response may not be strong given the ample office supply in the market and that the minimum bid was twice the 2008 bid.

The site was launched in August 2008, when it was on the confirmed list. The Urban Redevelopment Authority received just that one bid of $4.65 million from RSP Architects Planners & Engineers but rejected it as too low.

It transferred the site to the reserve list in October that year.

Cushman & Wakefield Singapore managing director Donald Han said the top bidder this time is probably keen to keep some of the space for its own use.

‘They will have to control their costs well, as their total bill could come up to about $400 psf,’ he said, adding that apart from the land cost, construction expenses will likely amount to $150 to $180 psf.

Rents in the office sector are almost at the bottom of the cycle. The development may be completed by the middle of next year, when office rents may recover, said Mr Han. ‘If they can lease out at $5.50 psf, they can get a yield of about 10 per cent.’