SINGAPORE has recorded the third fastest office rental growth in the Asia-Pacific region, with rents up 6.1 per cent in the second quarter, said the latest report from Colliers International.

The Republic is still the region's third most expensive office location, after Tokyo and Hong Kong, the property consultancy said.

Across the region, office rentals posted 1.4 per cent growth on average in the second quarter from the first. 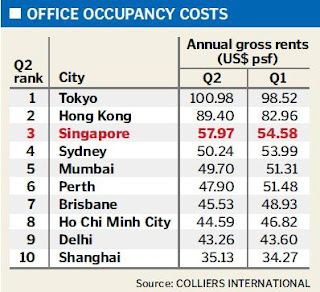 Office leasing demand showed no signs of abating despite the looming sovereign debt crisis in Europe, Colliers said in a statement.

Indeed, Hong Kong saw the fastest growth in office rentals at 8.4 per cent quarter-on-quarter, followed by Wellington, New Zealand, which registered a 6.8 per cent rise in office rents.

Singapore's No. 3 spot came despite concerns over the impact of plenty of new office space coming on stream.

At the end of June, average Grade A gross office rents in Singapore's Central Business District were up 6.1 per cent to $6.77 per sq ft a month from the first quarter. Colliers expects office rentals in Singapore to increase by another 10 per cent in the second half.

It said that some companies are taking the chance to flock to better quality offices, while others are taking advantage of competitive rental rates to take up more space in anticipation of hiring extra staff as the economy rebounds.

The office market recovery here has been stronger than expected, though rents for old buildings lacking modern infrastructure will lag behind those for newer ones, said Collier's director of research and advisory Tay Huey Ying.