Far East Organization's Nam Hee Contractor and Frasers Centrepoint's FCL Topaz linked up to put in the top bid of $229.4 million, or $321 per sq ft per plot ratio (psf ppr). 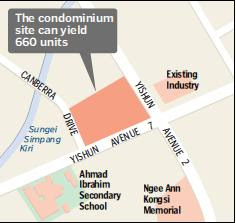 The weak level of interest reflects more cautious sentiment among developers, though other factors such as the site's location also played a part.

Ngee Ann Polytechnic real estate lecturer Nicholas Mak said if new home sales moderate to a sustainable level from here on, developers will be less bullish when tendering for sites.

Ms Chua added that developers are also less desperate to build up their landbanks now that many managed to secure sites recently. They will be more selective as there will be many more government sites to choose from in the second half of the year.

Also, property experts said the Yishun site is not very attractive as it is not near an MRT station. The site is at the junction of Yishun Avenue 2, Yishun Avenue 7 and Canberra Drive. Frasers Centrepoint said it plans to build 660 units of about 1,000 sq ft on average.

Mr Mak added that the large potential supply of new residential properties in Yishun and Sembawang could have deterred some developers from bidding.

'Competition from the large supply of new homes in the Yishun and Sembawang would mean that new projects in these areas will take a longer time to sell,' he said.

While the tender response was relatively muted, the top bid is reasonably priced, reflecting a break-even cost of about $600 psf, said CBRE Research director Leonard Tay.

Units in this project will possibly sell above $650 psf, said Mr Tay.

For comparison, Mr Tay said that in March-April, units in The Estuary were transacted at $660 to $800 psf, and resale units in the adjacent Yishun Emerald and Yishun Sapphire went for $540 to $630 psf in February-May.