URA to put hotel site up for tender soon

A DEVELOPER has shown interest in a 99-year hotel site at the junction of Clemenceau Avenue and Havelock Road, committing to pay at least $40.8 million or $328 per sq ft per plot ratio (psf ppr) for it.

The Urban Redevelopment Authority (URA) said yesterday that it will launch the land parcel for tender in about two weeks' time. Property consultants expect to see considerable demand for the site. 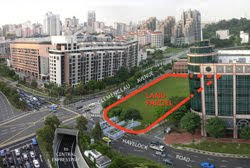 The plot became available for sale through the reserve list system in March 2008. It measures 0.55 ha, has a maximum permissible gross floor area of 124,377 sq ft, and can accommodate a development of up to seven storeys high. URA estimates that some 195 hotel rooms can be built on the site.

The land parcel is right next to Central Mall, and is within walking distance to entertainment and food and beverage outlets at Riverside Point and Clarke Quay. The area is also home to several other hotels such as Swissotel Merchant Court Hotel and Novotel Clarke Quay Hotel.

Cushman & Wakefield managing director Donald Han believes there could be at least five bidders for the site, and the top bid could reach $480-500 psf ppr.

'The hotel market has improved this year because of strong tourist arrivals,' Mr Han said. In April, the number of visitors to Singapore grew 20.4 per cent year-on-year to 938,000.

He added that the site at Havelock Road has a central location, and it could be suitable for a three and a half to a four and a half-star hotel.

Colliers International research and advisory director Tay Huey Ying also expects to see 'a handful' of bidders for the site. The site is not too big, so the total investment sum should be rather affordable, she said.

The hotel could target corporate visitors, to coincide with the increasing stock of office space completing in the central business district, she added.

Ngee Ann Polytechnic real estate lecturer Nicholas Mak projects that there will be four to eight bids for the site, ranging from $378-426 psf ppr.