A HOTEL site suitable for a medium-size development, at the junction of Clemenceau Avenue and Havelock Road, will be put up for sale in two weeks.

Yesterday, the Urban Redevelopment Authority said an unnamed developer has committed to bid at least $40.9 million for the 0.55ha site, thereby triggering the tender process. 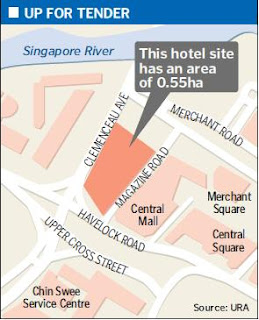 The 99-year leasehold site is next to Central Mall and is within walking distance of the Singapore River and Clarke Quay. It is also close to the financial district.

The site can yield a maximum gross floor area of 11,555 sq m and can be built up to seven storeys.

The Clemenceau Avenue site has been on the Government's reserve list since March 2008. Under this list of development sites, a site will be put up for tender only after a developer commits to a bid that reaches a minimum level set by the Government.

Singapore Tourism Board data shows that average hotel occupancy rose to 85 per cent in April, up 15 percentage points from last year. Average room rates rose by 12.2 per cent to $211, while revenue per available room surged 36 per cent to $179.

In a separate announcement, Credo Real Estate said that Hoi Hup Realty had recently agreed to buy Pender Court in a collective sale for $95 million.

Meanwhile, the freehold 32-unit People's Mansion in Geylang has been launched for collective sale.