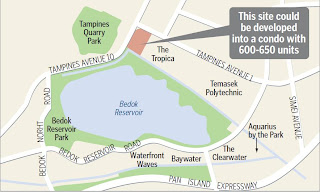 Sim Lian Land lodged the highest bid for the 99-year leasehold plot, which would be suitable for mass market housing – the property industry’s hottest sector these days. 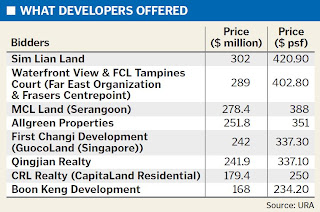 The tender is ‘another demonstration of developers’ interest in the mass market segment’, said Mr Joseph Tan, CBRE’s executive director, residential. Of the eight bids submitted, the first six were very close to one another, he noted.

Sim Lian Group executive director Diana Kuik told The Straits Times: ‘Our bid is competitive but not very aggressive. Land prices in general have gone up.’

Also, the site is in a mature estate and it offers a nice living environment, she said.

‘We are looking to build 600 to 650 units with a range of sizes, from small two-bedroom units to four-bedroom units as well as penthouses,’ she added.

It pointed out that caveats lodged for sales in new projects in the Bedok Reservoir area, such as Waterfront Key and Waterfront Waves, have ranged from $700 psf to $850 psf in the past four to five months.

‘When the new project is ready for launch in six to eight months’ time, we would expect it to be launched within the same price range or higher, subject to market conditions,’ said Mr Tan.

Confirmed list sites are tendered out on scheduled dates, without the need for developers to indicate interest.

The Tampines plot is next to The Tropica condominium and about five to 10 minutes’ drive from Tampines Central and Tampines MRT station.