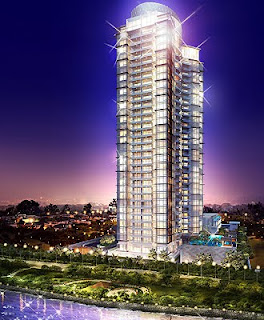 ONE of Hong Kong's biggest developers, Cheung Kong, has made its intentions clear for a sleepy mass market corner of the West Coast.
It is asking what would be - if achieved - record prices for the area at a preview for The Vision, on West Coast Crescent.

The preview, starting tomorrow, involves the release of up to 100 units mostly priced at $1,000 to $1,200 per sq ft (psf). This puts the starting price for an 818 sq ft two-bedder at nearly $900,000.
Cheung Kong's vision is to develop a high-end project to be the area's most luxurious building, said sales manager Cannas Ho at a media briefing yesterday: 'We're not building a mass product, we're building a high-quality product.'

That may explain the relatively high pricing for a project in something of a backwater. A property expert noted there is no particular MRT advantage there.

Experts said if the units sell at the asking prices, it would be a record for the West Coast area.
Next door, Blue Horizon registered seven deals this year at $764 to $841 psf.

Last year, Far East Organization made the news when it launched the 329-unit Centro Residences in Ang Mo Kio at over $1,100 psf - a suburban record.

Ms Ho said it is targeting upgraders, families and expatriates, and has fielded more than 1,000 inquiries in the past fortnight.

A second phase will be offered by year-end. Pricing depends on the market then, 'but we must adjust it upwards', she said.

She said The Vision, to boast 281 apartments and 14 strata terrace units, is near the science and lifestyle hub one-north, and educational institutions.

The apartments are mostly between 818 sq ft and 1,604 sq ft, with two four-bedroom penthouses at 2,702 sq ft each. The two-bedder is the smallest unit.

Cheung Kong is packing The Vision with stylish fittings and branded appliances designed to give the 99-year leasehold project a luxurious vibe.

For instance, the kitchen comes with a Smeg induction cooker and electric oven and the bathroom has a Hansa rainforest shower with body jet.

A clubhouse, Sky Paragon, is on the top floor of the 33-storey building, with a gym, spa, bar and function room.

At the preview, Cheung Kong will release up to half of the 14 strata terrace units, each with a built-up area of about 5,000 sq ft. Interested parties will have to submit offers, said Ms Ho.

Cheung Kong clinched the site in a state tender in March 2008 with a bid of $305 psf per plot ratio (ppr). Last year, the developer paid a much higher than expected sum of about $533 psf ppr for an Upper Thomson Road plot.

Meanwhile, Sing Holdings will hold a preview of its 229-unit The Laurels at Cairnhill Road this weekend, concurrently in Singapore and Jakarta, while Tiong Aik will preview Coralis near Marine Parade tomorrow.
About 100 The Laurels units will be released with typical units priced at $2,600 to $3,050 psf.

Over 80 units have been sold since the first special sale to ex-owners, staff and business associates was held late last month at $2,500 to $2,900 psf.