Property market: When is hot too hot? 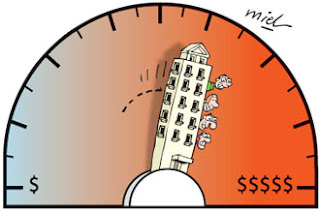 PROPERTY developers may have heaved a sigh of relief on March 8 when the Government signalled there would be no more measures to cool the housing market - 'for now'.

But any comfort they took from that would have been cut short when National Development Minister Mah Bow Tan added what has become his signature catch phrase: 'We will monitor the market closely.'

He told Parliament: 'If there are signs that the market will overheat again, we are ready to introduce additional measures to stabilise the market.'

The words in themselves are not new. The Government has often assured home buyers that it will keep a close eye on the market and go in if necessary.

The problem is that it is now unclear what the Government considers an 'overheated' market - and when it will decide to intervene.

After all, when it announced measures to cool the private property market last month, the move came as a shock to property developers and home sellers.

Cooling measures had been introduced just five months earlier in September, when the Government removed the Interest Absorption Scheme and rolled out a huge supply of land.

More importantly, the property market last month seemed nowhere near the feverish heights of 2007 or even last year.

Sales of new homes were only just starting to recover after the September measures, while prices were rising at a slower pace than before.

So, why did the Government decide to cool the market last month?

Traditionally, there are three triggers for intervention: property speculation, prices and sales.

The key catalyst is usually speculation, but it was apparently not the main reason last month. The Government acknowledged that the overall level of speculation in the market was lower than at the height of the property boom.

This was backed up by an analysis by DTZ Debenham Tie Leung, which found that sub-sales - the main measure of speculation - fell to a three-year low last year. Sub-sales are when people buy new apartments and resell them quickly even before they are built.

But perhaps the Government could have started measuring speculation in another way: The number of apartments bought and then resold within a year, whether or not they have been built.

Still, sceptics noted that even if these transactions had risen, that may not have been evidence of real speculation. Private home prices surged by 24 per cent in the second half of last year, likely persuading even genuine home owners to cash in for a quick profit.

So, the Government was more likely to have intervened based on the second and third factors: A jump in prices and sales.

Indeed, it said in its statement that private home prices, which rose 7 per cent in the fourth quarter despite the cooling measures, had rebounded faster from its trough than in previous slumps.

But this in itself does not mean that the price rally is unfounded or unsustainable. The entire economy recovered faster than expected, partly because not many jobs were lost in last year's recession.

This helped to explain the quick property rebound: As most home owners kept their jobs, fire sales were rare.

At the same time, the economic uncertainty brought the booming market to a standstill. This prompted home seekers to rush in - many of them genuine buyers who had been priced out of the 2007 boom - and propped up home prices.

The Government also cited a sharp spike in new home sales in January as a reason for its measures last month.

But while sales tripled in January from the month before, this was only the first rise since July last year, and came on the heels of three months of slow sales - hardly a sign of excessive exuberance.

All this adds up to questions about whether the Government has fundamentally changed its approach of market interference.

In the past, the Government has preferred to stay out of the market as much as possible, waiting until a bubble has definitively built before going in to burst it, often with plenty of advance warning.

Even when it intervened 'pre-emptively' in September last year, it came after seven consecutive months in which developers had sold more than 1,000 new units each month.

But now, the Government seems to be signalling it will take a more active approach and intervene at the smallest - and earliest - sign that froth is beginning to build up.

And it will watch not just activity in the property market itself, but also broader economic trends - rapid growth, for instance, or low interest rates - that could spur on speculators and build a bubble.

It may have been no coincidence that the Ministry of National Development released its cooling measures on the same day the Ministry of Trade and Industry raised its 2010 growth forecast for the Singapore economy and warned of asset price bubbles in the region.

While it would be too extreme for property players to now nervously eye economic growth as a harbinger of cooling measures, it certainly seems many more factors than showroom crowds must be taken into consideration these days.

Then again, it may not matter what the Government actually takes into account when determining a bubble - only that these factors are kept a secret.

That way, a certain level of uncertainty will be introduced into the market - a clever and more permanent way to temper speculation.

Of course, there is also another possible reason the Government seems to be coming down insistently on private property: The fact that opposition politicians have made housing an election issue.

On March 5, the Government introduced cooling measures in the HDB market as well, making it clear it wants home prices to ease or, at least, stop rising.

Whether these measures will work remains to be seen.

But DBS property analyst Adrian Chua sees it this way: If the measures work, prices fall, and if they do not, the Government may intervene until they do.

Or, then again, it may not.

The fact is, no one knows - which is ultimately the most effective cooling measure of all.