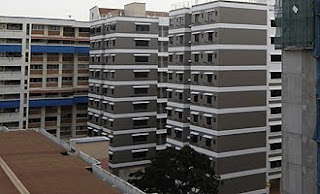 A NEW rental HDB block is coming up in Tampines Street 22 - and unlike their neighbours in Pasir Ris and Tampines Street 83, residents there are happy to have it near them.

All 20 residents interviewed by The Straits Times yesterday expressed no objections. Some were even welcoming of their future rental block neighbours who are expected to move in around May.
Their only gripe: the loss of the football field on which the new block is coming up.

Said project manager Koh Chin Lee, 40, whose Block 294 is next to the rental block: 'It is good that we have a place for the poor people to live. They are humans, too. This is a nice neighbourhood and they are welcome here.'

Retiree J. Lim, 68, is confident that the rental block will not affect the value of his five-room flat.

'This is a very good location. We have a market nearby and the MRT station is not too far away. One rental block is not going to change anything,' he said.

The reactions of the Tampines Street 22 residents are a marked contrast to that of residents in Tampines Street 83 and Pasir Ris Drive 6, who kicked up a fuss last month when they discovered that new rental blocks were coming up in their neighbourhoods.

Their main worry: that the rental blocks would lower the quality of the neighbourhoods and the value of their homes.

Some of the residents said they should have been informed earlier.

In the case of Tampines Street 22, MP Irene Ng had mobilised her grassroots leaders to inform residents of the upcoming rental block when she first got the news early last year.

Ms Ng yesterday told The Straits Times that she is very proud of her constituents for not protesting against the rental block in their midst.

'They have been very understanding. Some of them were concerned about space, but when we explained to them properly, they were okay,' she said.

She added that a welcome party will be planned for the new residents when they move in some time around May.

The rental block, which has 270 units, will be completed by the end of this month, the Housing Board confirmed yesterday.

The HDB had earlier told The Straits Times that it is building 7,000 rental flats for the poor and needy over the next three years, to be spread across the island 'to achieve a balanced social mix'.

There are currently about 42,000 rental flats across the island, occupied by those with low income.
Mr K.G. Tan, 58, who lives in Tampines Street 22, believes rental flat residents should not be snubbed.
Said the contractor: 'You never know when your luck is going to change. One day, you might end up living in a rental flat. Just imagine, how will it feel to have everybody not wanting to live near you?'