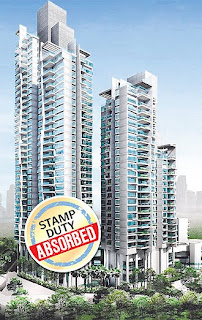 THE property market may still be sizzling, but at least one property developer here is offering a carrot which has not been seen in more than a year to entice buyers and boost sales.

The incentive - stamp duty absorption - is usually deployed by nervous developers during market downturns, but is now on offer at the 360-unit Concourse Skyline on Beach Road.

The deal, which can save homebuyers about 3per cent of the price, has been used extensively during market slumps.

However, industry experts say it has not been used since 2008, except on a one-off case-by-case basis.
They say the developer which has advertised the offer, Hong Fok Land, may be trying to ameliorate the effects of recent anti-speculative market-cooling measures unveiled by the Government.

However, some suggest the move may simply be a bid to counter slow sales at the project.

The offer at Concourse Skyline applies to selected units till April17. Hong Fok said the promotion was timed to coincide with the slated opening of the city leg of the Circle Line that same day. It draws attention to the development's accessibility and convenience, a spokesman said.

Stamp duty absorption is similar to the interest absorption scheme which was abolished by the Government last September as part of market-cooling moves.

Under the interest absorption scheme, buyers had to take out a bank loan at the time of purchase but the developer absorbed interest payments until the project's completion.

Property consultants The Straits Times spoke to were unaware of any similar offers being made openly - and said buyers should not hold their breath waiting for more to be touted.

Most said this was likely to be a unique case. The market is still hot, with sales and prices rising, so it is unlikely other developers will follow suit.

Buyers have needed no prodding, with sales of new private homes by developers rising to 1,476 units in January - three times as high as the previous month and the highest level since August last year.

Some property experts said, however, that this unusual move could be aimed at improving poor sales at Skyline.

It was the same month that US investment bank Lehman Brothers collapsed, sparking the global financial crisis.

While 68 units were sold within the first month after the launch, sales have since tapered off to an average of about eight a month over the past 16 months.

A total of 170 units had been sold as of January this year, according to the Urban Redevelopment Authority's website.

In the past, developers had rolled out gimmicks such as renovation allowances and vouchers for electrical appliances in a bid to boost flagging sales.

Said Ngee Ann Polytechnic real estate lecturer Nicholas Mak: 'These measures (by the Government) are expected to shave off about 1,000 homes sold yearly...So offering absorption of stamp duty might be a way for developers to increase sales.'

Chesterton Suntec International research and consultancy director Colin Tan said that absorbing stamp duty would lower a buyer's costs without bringing down valuation prices, which is a key market indicator cited by developers.

The 'uncommon move', said Mr Steven Tan, executive director of
OrangeTee's residential division, might be to encourage homebuyers to revisit the showflat, since newer launches have served as stiff competition.

Colliers' Ms Tay added that the absorption scheme would cushion the expense of those who might be thinking of selling the property within a year of purchase.

Last month, a seller's stamp duty was introduced to deter short-term speculators. It requires sellers to pay a levy of about 3per cent if they offload a property within a year of purchase.

Hong Leong Holdings' Aalto in Jalan Kechil, near Meyer Road, which first started sales in August 2007, has also seen slower sales with only 118 of its 196 units sold as of January.

However, when contacted, Hong Leong said it would not be absorbing stamp duty for that project.
Concourse Skyline is a 99-year leasehold project consisting of one- to four-bedroom apartments and penthouses. It is expected to be completed in 2013.