‘City of Waterways’ is taking shape

It looks like Singapore the Garden City is on target to become a City of Waterways too. 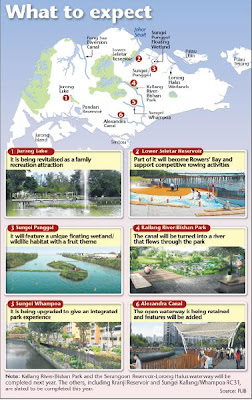 With World Water Day falling tomorrow, PUB, the national water agency, is confident that its masterplan targets will be met.

The banks of the country’s 32 rivers and 7,000km of canals and drains are being transformed, as are its 15 reservoirs which will teem with water activities.

A key element of PUB’s Active, Beautiful, Clean Waters (ABC Waters) programme is the people factor: projects will involve residents so that they have ownership too.

The masterplan identified more than 100 locations where projects will be implemented in phases till 2030.

The PUB first identifies a waterway or reservoir for transformation by looking at such factors as demographics, surrounding facilities and upcoming developments.

It then sees how the ABC Waters project can complement the surroundings and add value to the area.

Grassroots groups, schools and residents are involved: Feedback, ideas and views are gathered from them. After all, they will participate in and organise activities around the completed projects.

Upgrading work to the waterways of Kolam Ayer, MacRitchie and Bedok have so far cost $23 million.

Mr Yew believes that the property prices in his constituency have gone up as the waterway now provides waterfront living amenities.

He feels that there is now a sense of ownership of the waterway. The constituency club organises activities such as gardening and performances on the floating deck.

Among the projects that are expected to be completed this year are: Sungei Punggol, Lower Seletar Reservoir, Pandan Reservoir and Jurong Lake. So too will Sungei Whampoa (St George’s Lane), Sungei Kallang/Whampoa RC31, Kranji Reservoir, Pang Sua Diversion Canal and Alexandra Canal.

Kallang River-Bishan Park and the Serangoon Reservoir – Lorong Halus waterway will be completed next year.

A problem that currently plagues canals here is pollution, but ‘pollution of the waterways has decreased over the years’, said Mr Tan Nguan Sen, director, Catchment and Waterways, PUB.

Last year, an average of 14 tonnes of flotsam was collected daily from the waterways. This is a reduction from the daily average of 15 tonnes collected in 2008, despite a steady increase in Singapore’s population.

Mr Eugene Heng, 60, chairman of the Waterways Watch Society, sees these changes to the waterways as a positive thing.

The society is a volunteer group that monitors, restores and protects the aesthetics of the waterways.

Mr Heng feels that ‘allowing more water activities in select areas is something that the society believes will help the public enjoy and, at the same time, appreciate, understand and value our waters’.